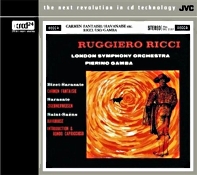 
Spanish violinist and composer Pablo Martín Melitón de Sarasate y Navascués (1844-1908) dazzled audiences for decades with his playing and left the rest of us several basic-repertoire violin items performed brilliantly on this disc by violinist Ruggiero Ricci, with Pierino Gamba the London Symphony Orchestra in accompaniment.


Ricci's handling of Sarasate’s Carmen Fantasy (based, of course, on music from Bizet’s opera) is one of vigor, precision, and sheer brilliance. While Ricci’s version does not display the sultry sensuousness of Perlman's account with Lawrence Foster from a decade or so later, which remains my favorite interpretation, Ricci's reading probably makes a more vivid and more-lasting impression. His sheer virtuosity and showmanship carry the day, making this a classic performance in anyone's book.


Sarasate's Zigeunerweisen ("Gypsy Airs") comes next, with again Ricci reaching for the stars. He imparts plenty of atmosphere and color to the familiar Hungarian violin tunes, making this rendition among the best you'll find anywhere. Similar to the Carmen Fantasy, Zigeunerwisen tends to sound like the collection of bits and pieces that it is, yet what glorious bits and pieces they are, with Ricci making the most of each little showpiece. The violin sounds soulful, mournful, melancholy, bright, exciting, tuneful, and zesty by turns.


Rounding out the album are two works by Camille Saint-Saens (1835-1921): the Havanaise and the Introduction and Rondo capriccioso. As with the Sarasate music, they are pieces that show off the skills of the performer, and again Ricci shines in the process with intensely rhythmic playing. Throughout all of the performances, Maestro Pierino Gamba's accompaniment with the LSO demonstrates only the finest collaboration, never upstaging the soloist yet always supportive and sympathetic. 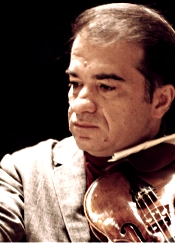 
The remastered audio is extremely lifelike and alive: A fairly close violin, yet one with a rich, lustrous, realistic tone. A good sense of orchestral depth, with wide dynamics and a strong impact. Well-shaped percussion attacks. Quick transient response. Sharply etched yet smoothly rendered definition. And well-extended frequency extremes complete the picture. As I said up front, it's audiophile all the way and an improvement on the sometimes harder, glassier sound of the original Decca release.


Any quibbles? Well, the disc duplicates the original LP, which means there isn't a lot of material on it, about thirty-eight minutes in all. For the price of this audiophile disc, it's short measure, but thought of in terms of pure sensory pleasure, maybe it's a bargain.

Should you feel inclined to shop around for the disc, here are a couple of suggestions:

Email ThisBlogThis!Share to TwitterShare to FacebookShare to Pinterest
Labels: Sarasate