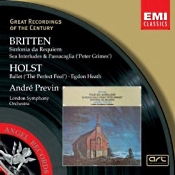 Fritz Reiner, Bruno Walter, Leonard Bernstein, Thomas Beecham, and Leopold Stokowski in the late Fifties and Sixties. Otto Klemperer, Herbert von Karajan, and Bernard Haitink in the Fifties, Sixties, Seventies, and beyond. And then, too, there was Andre Previn and in the late Sixties, Seventies, and Eighties. I’m not sure many of us realized at the time that we were experiencing some kind of golden age of recorded stereo music. I know I didn’t. Looking back, these men are now among my favorite conductors, and they produced some of my favorite recordings. Thank goodness for CD’s and our ability to preserve their legacy.


The selections on this EMI “Great Recordings of the Century” disc represent some of Previn and the London Symphony’s very best work. From English composer and pianist Benjamin Britten (1913-76) come his Sinfonia da Requiem, “Four Sea Interludes,” and “Passacaglia”; and from English composer Gustav Holst (1874-1934) come his Perfect Fool ballet and “Egdon Heath,” all of the music recorded between 1973 and ‘74.


Of the bunch, it’s the “Four Sea Interludes” from the opera Peter Grimes that stand out for me. Beautifully recorded and colorfully rendered, these short tone pictures were long a reference standard in the LP days. Although EMI had released them on CD before (at the time coupled with Britten’s Spring Symphony), the company (now Warner Classics) remastered them in 2003 using EMI’s “Abbey Road Technology,” and they sound smoother and more revealing than ever. 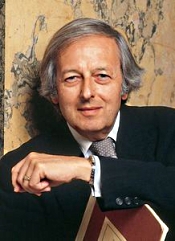 For anyone who likes, say, French composer Claude Debussy’s La Mer or English pastoral music in general, Britten’s “Four Sea Interludes” (“Dawn,” “Sunday Morning,” “Moonlight,” and “Storm”) are a must, a beautiful evocation of the sea, the sky, the mist, the coastline, and nature. Previn perfectly judges the pace for each section and creates vivid little symphonic pictures. The Sinfonia da Requiem may be quite a bit heavier, but it sounds so well recorded, it’s worth a listen. In contrast, the Holst ballet music from The Perfect Fool is light and festive, and Previn makes it a delight.


Then, the disc concludes with Holst’s somber tone poem “Egdon Heath,” a moody affair depicting a passage from Thomas Hardy’s The Return of the Native that describes the apparently desolate moor. Holst said this work was “his finest achievement.” Perhaps so, it’s certainly lyrical and poetic in Previn’s hands, but don’t be surprised if it achieves its aim and you find yourself a little depressed.


Again, I can’t say enough for the recorded sound. It is warm and detailed, polished and refined, rounded in all the right, natural ways, yet revealing, too, with a wonderful sense of depth and stereo imaging. Oddly, however, there appeared to my ears a volume imbalance between the Britten and Holst pieces that required I turn down the Holst slightly. Maybe it was just me.