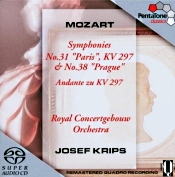 Now, this is the way I remember Philips recordings and the Concertgebouw sounding years ago in their glory days. Way back before digital processing and before Chailly and Decca had picked up the Concertgebouw Orchestra, there was this wonderful resonant ambiance that gave the ensemble a golden glow. The old Concertgebouw recordings, like this one, were little gems that shone radiantly in the world of classical music. It’s nice to have some of them back more radiant than ever.

From time to time I’ve mentioned that during the early 1970’s when Quadraphonic sound was a short-lived rage, companies like Philips experimented with the technique but never actually issued much of it in anything but straight two-channel stereo. Then, some thirty years later with the advent of SACD multichannel capability, PentaTone Classics began re-releasing a number of Philips’s old four-channel recordings on hybrid stereo/multichannel discs, meaning a person could play them back in two channels or four or five channels, depending on one’s equipment and one’s preference.  PentaTone re-released the current issue in 2003. 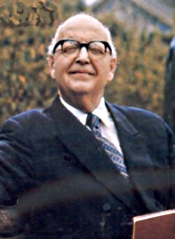 I played the Mozart from the SACD stereo layer in my regular two-channel system, and it sounded terrific. Very clean, very smooth, and, most happily, very glowing and ambient, better than I ever recalled hearing the recording before, perhaps because PentaTone remastered both the multichannel and stereo layers. I would imagine the ambient bloom I’m referring to would show up even better being reinforced by some subtle surround information in the rear channels. Incidentally, the Philips recordings were originally miked in four channels, not five or five-point-one, so that’s the way PentaTone have preserved them.


As far as the music is concerned, it’s lovely. Josef Krips was a consummate Mozartian of the old school, and his performances of Symphony No. 31 “Paris” and and No. 38 “Prague” are bouncy, charming, traditional, but reasonably impassioned, too. There is no stuffiness about them, especially not the little “Paris” Symphony, and they come across most lovingly. Compared to the several rival recordings I had on hand--Barenboim, Klemperer, Mackerras--Krips loses something, perhaps, in overall character, appearing a bit plainer than the others. However, one should not consider this a drawback, and Krips’s traditional approach should appeal to those listeners seeking conventional yet affectionate interpretations. There is no lack of warmth or enchantment in these performances for all their straightforwardness.

If there is any drawback to the disc at all, it’s that many of Krips’s recordings in regular stereo are available at a much lower cost, if not in as clean sound. But if it’s multichannel you’re looking for or the best possible Krips in two-channel, this is a fine route to take.