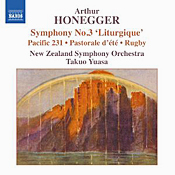 Because most other record companies produce maybe one or two discs a month, it isn’t hard to decide which one or ones to review. But because the folks at Naxos usually produce up to a dozen new discs a month, it’s a little more problematical which ones to request for review. Sometimes, they’re mediocre. Sometimes one lucks out and finds a gem. This one is a gem.

Performances and sound are top-notch for this recital of Honegger orchestral music, every bit the equal of David Zinman’s fine Decca recording of some years back and at up to half the price. It’s a bargain that’s hard to resist, especially if you’ve always wanted a topflight Pacific 231, possibly Honegger’s most-famous work, but haven’t cared to pay full price for the accompanying things on a full-price disc.

Arthur Honegger (1892-1955), like other composers I’ve mentioned before, was one of those modernists of the first half of the twentieth century who nonetheless clung to the last vestiges of Romanticism. We get visions in his work of emotional power, impressionism, and tuneful melodies aplenty. It’s a felicitous arrangement. 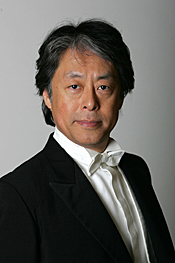 The album begins with his Symphony No 3, subtitled “Liturgique.” From 1945, it is no celebration of Allied victory in World War II but a liturgical lament for the souls lost in the War and the devastation the War incurred, ending in a prayer for future peace. It is quite a powerful and moving composition that deserves wider recognition, and Maestro TakuoYuasa plays it in such a way as to convey its varying moods significantly.

The sound is nothing short of terrific. It’s one of Naxos’s best efforts, with not only a wide stereo spread, wide frequency response, and wide dynamics, but with one of the best recreations of orchestral depth I’ve heard on any of Naxos’s releases (or anyone else’s). While I noted a touch of congestion in the loudest passages, the sound is very impressive for the relatively few bucks invested.

Email ThisBlogThis!Share to TwitterShare to FacebookShare to Pinterest
Labels: Honegger