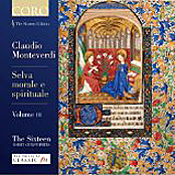 If you don’t know by now, The Sixteen is the name of a United Kingdom-based choir and period instruments orchestra, founded by Harry Christophers in 1979, that has been making records and winning awards for over three decades. Since 2001 The Sixteen have been releasing their material under their own record label, CORO.

On the present recording, a choir of about twenty individuals joins about half as many instrumental players to perform the third volume of Selve morale e spirituale by Italian composer Claudio Monteverdi (1567-1643). The title translates to something like “a moral and spiritual forest,” and it contains a collection of liturgical works the composer wrote late in his career, around 1641. This third program in The Sixteen’s series includes twelve selections, including some with full choir, some with a doubling of strings, and one solo number. It’s a varied and, as always from this source, enjoyable anthology.

As we would expect, The Sixteen execute each of the numbers superbly, their singing clearly articulated, their phrasing precise, and their musical expression uniquely strong. They begin the program with the second Laudate Dominum, two psalms for eight voices, two violins, and organ. It exemplifies Monteverdi’s dictum: “recitar cantando” (“speak through singing”), meaning it’s essential for the singers to interpret the words intuitively, giving them more freedom of expression. Thus, a given set of words might have different inflections each time the singers perform them.

The first and second of Monteverdi’s settings for the Magnificat, the hymn of the Virgin Mary in Luke, 1:46–55, beginning “My soul doth magnify the Lord,” used as a canticle at evensong or vespers, are especially impressive. This is so even though the composer left the parts for altos and bass out of the first section when he sent it to the printers. Here, the voices of The Sixteen typify their blending together as one, producing the effect of a single instrument. It’s not accidental that Monteverdi spent the last thirty years of his life as choirmaster of St. Mark’s in Venice, the center of much of the ceremonial and liturgical life of the city. One can hear in the music how the Church must have used the piece on special occasions. 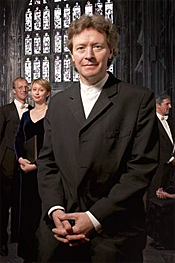 In the middle of the program we find the solo Pianto della Madonna “Iam moriar, mi fili,” sung by soprano Grace Davidson. It is something of a showstopper, exquisitely beautiful.

And so it goes through over seventy-six minutes of music. The singing is creative, dramatic, perfectly attuned to the needs of each selection, and precisely executed without sounding academic or stuffy. Favorites? Certainly, the first Magnificat that closes the show in a grand, formal manner; but also Beatus vir (Secondo) and E questa vita un lampo for their vitality and imagination; and Fonfitebor tibi Dominine (Secondo) for the simple, straightforward expressiveness of its three voices in solo and combination.

The CORO producers made the album at St. Silas the Martyr, Kentish Town, London, in May and November of 2011. The sound they obtained there is quite lovely, the voices a trifle forward but smooth and natural, while remaining clear and detailed. The limited orchestral support is likewise realistic, and the two groups appear well integrated, neither totally dominating the aural setting. A light, agreeable hall resonance reminds one that the music is liturgical in nature, after all.

Email ThisBlogThis!Share to TwitterShare to FacebookShare to Pinterest
Labels: Monteverdi