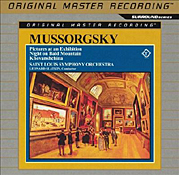 As you know, Modest Mussorgsky wrote his Pictures at an Exhibition in 1874 as a collection of piano pieces, each short work describing a different painting or drawing by the composer’s friend, Viktor Hartmann. Mussorgsky’s idea was to create a series of tone poems as a tribute to the artist by depicting impressions of ten of Hartmann’s paintings hanging in a gallery and being viewed by passersby. Mussorgsky’s music never really impressed the public, however, until Maurice Ravel orchestrated them many years later in the form we know them here.

Maestro Leonard Slatkin and his St. Louis players brought these oft-recorded works to disc in 1975, but I wish he had taken more time to recreate the color and character of each portrait. As it is, he seemed to spend more time trying to elaborate on the beauty of the music rather than interpret the individual peculiarities of the paintings. The various “Promenades,” for instance, seem hurried, as though the visitors to the gallery were rushing to find an exit; the “Ballet of the Chicks” doesn’t seem too much different from “Children Quarreling at Play”; the “Hut on Fowl’s Legs” doesn’t have as much energy as I’d like; and “The Great Gate of Kiev” seems to lack necessary grandeur. For a definitive rendering, compare Fritz Reiner (RCA/JVC) and his Chicago Orchestra, where every miniature has its own unique and vivid distinctions.

The Khovanshchina excerpts and Night on Bald Mountain come off better, with a little more flair. Best of all, however, is Alexander Borodin’s In the Steppes of Central Asia, which Slatkin draws out beautifully, conveying a real sense of being in a separate place and time. 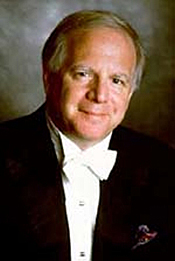 Vox originally made the recordings in two-channel stereo and four-channel quadraphonics.  Mobile Fidelity remastered them in their Ultradisc UHR GAIN 2 series, on two layers of a hybrid SACD, meaning you can play it in stereo on a regular CD player or in discrete four channel on a Super Audio CD player. In two-channel SACD stereo, as I listened to it, the Mussorgsky sounds velvety smooth and rich, with plenty of hall resonance, maybe even a little too much.

Bass is strong, too, as is treble when present. On the other hand, the Borodin sounds even better, slightly clearer and more transparent. I wondered about this and then noticed that the original cover jacket for the Mussorgsky LP lists only the Mussorgsky works, not the Borodin. There is no mention in Mo-Fi’s booklet, but it led me to wonder if Vox hadn’t recorded the Borodin at another time and place. I don’t know. But it does sound very marginally better than the Mussorgsky, which in its own right sounds pretty good.

I would guess that this release may sound best played through a dedicated SACD system in multichannel rather than the ordinary two-channel stereo I heard. Although I wasn’t bowled over by Slatkin’s rather conservative interpretations, I’d say if you have a multichannel SACD system, you might want to try and sample the sound.