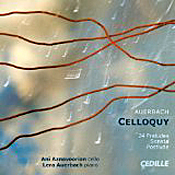 No, it’s not the distinguished American parapsychologist and chocolatier Loyd Auerbach. It’s the distinguished Russian-born American composer and pianist Lera Auerbach (b. 1973), who calls her present album Celloquy. No, again, “celloquy” is not a word you’ll find in the dictionary. More about that in a minute.

Now, I have to admit that I am not too keen on most modern classical music. It appears to me that many modern composers of the past fifty or seventy-five years have concentrated more on creating their own unique musical sound worlds than on entertaining their audience. Indeed, it can even seem that practically the only orchestral composers still interested in things like melody and harmony and such are the ones working for Hollywood, people like John Williams and Hans Zimmer, composers that critics often look down upon as not really important because they take into consideration the preferences of their listeners. You know, like they actually want to produce stuff that people might enjoy. I exaggerate, of course, and I’m obviously a barbarian. I suppose one can say the same sort of thing about most modern artists; in their zeal for creativity, they feel they must move away from the past and develop something new and different, whether audiences like it or not. Audiences can catch up later.

However, Cedille Records just as often showcases modern composers who do reach out to their listeners, and such a case is that of Ms. Auerbach. Sorta. She begins the program with 24 Preludes for violoncello and piano, which she wrote in 1999. You’ll recall that a prelude, besides being a piece of music intended as an introduction, is a relatively short, independent instrumental composition, free in form and resembling an improvisation. Her preludes are obviously in the latter category, following in the tradition of Bach’s Well-Tempered Clavier and the cycles of preludes from Chopin, Scriabin, and Shostakovich.

The composer’s 24 Preludes are nearly an hour long, some of them eerie, some of them playful, many of them melancholy, wistful, even forlorn. These latter moods work especially well with the naturally mellow, somber sound of the cello, played by Ani Aznavoorian and nicely complemented by Ms. Auerbach on piano.

Ms. Auerbach writes of her Preludes, “I wished to create a continuum that would allow these short pieces to be united as one single composition.” So each prelude is brief--one to five minutes--but forms a part of the larger, unified whole. Only listeners can determine for themselves how successful she was. I found the occasional strident contrasts among the mostly lyrical sections more distracting than frightening or enlightening. Still, the work in its totality needs the variety, and no one can like every note of every musical composition ever written.

More important is the sublime beauty of some of the Preludes, as with the excerpt of No. 12 at the end of the review. And equally important is how well Ms. Aznavoorian and Ms. Auerbach play them, both of them virtuoso performers.

Then, too, is the fact that not everything we hear is as it seems. Ms. Auerbach appears to have had a little fun with these works, throwing in teasing hints of Bach, Mozart, Chopin, Offenbach, Bartok, and the like. She even suggests she included hints of the rock band Queen in No. 17. OK, I didn’t notice it, but I’ll take her word for it. 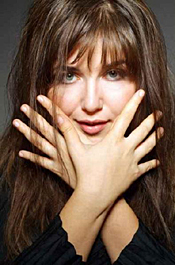 Auerbach wrote the first of the disc’s companion works, the Sonata for violoncello and piano, in 2002. It’s in a typical four-movement structure and alternates between passages of intense delight and ones of discordant energy. Although the piece was a bit too eccentric for my taste, one can sense the emotional turmoil throughout and certainly appreciate the superb musicianship of the two performers.

The final number on the program is the little Postlude for violoncello and piano, using a prepared piano; that is, one altered by placing things on the strings to produce new sounds. The piece is actually a transformation of the Prelude No. 12 heard below but distorted in various weird ways. It’s fascinating in its own bizarre manner.

Cedille producer and engineer Adam Abeshouse recorded the music at The Performing Arts Center, Purchase College, State University of New York, in August of 2012. The sound is smooth and natural, miked at a moderate distance that provides both detail and warmth. We also hear a mild reverberation lending a soft glow to the proceedings. It’s all very soothing yet very clear and focused.

Oh, and about that title, Celloquy. Apparently, it’s an expression of Ms. Auerbach’s own devising, a clever play on the word colloquy, meaning a conversation or dialogue. In this case, I assume she refers to the dialogue between cello and piano as they express their emotions to one another in music.

Email ThisBlogThis!Share to TwitterShare to FacebookShare to Pinterest
Labels: Auerbach