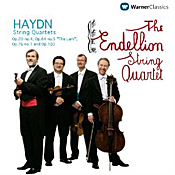 Austrian composer Franz Joseph Haydn (1732-1809) was to the string quartet what Vivaldi was to the
tone poem, what Bach was to counterpoint, what Beethoven and Berlioz were to orchestration, what Haydn himself was to the symphony, and what the Aflac duck and the Geico gecko are to insurance companies. Haydn didn’t invent the mediums, but he refined and popularized them. It seems only fair that people today call Haydn the “Father of the Symphony” and the “Father of the Quartet.”

Haydn wrote over sixty-nine authenticated string quartets and more than half a dozen others he may have written. A close friend of Mozart, a teacher of Beethoven, and instrumental in the development of not only quartets and symphonies but sonata form and the piano trio, Haydn was among the most-influential composers of all time. The present disc by the Endellion String Quartet offers a brief but illuminating overview of the man’s string quartets, providing three complete and two incomplete examples of his output, spanning many years of his work.

The program begins with the String Quartet in G major, Op. 76, No. 1, written in 1797. It’s a mature yet ebullient piece, played with cultured brilliance by the Endellion String Quartet (Andrew Watkinson, violin; Ralph de Souza, violin; Garfield Jackson, viola; David Waterman, cello). This high level of performance shouldn’t surprise one; the group have been together for almost thirty-five years as of this writing, with only a single personnel change in all that time. They play with a finely honed style and an equally committed passion, their instrumental sound melding together like golden honey.

Anyway, the first of the Op. 76 quartets is a good example of Haydn’s latter work. It’s full of high spirits, with a serene, hymn-like Adagio, a zippy Minuetto in scherzo form, and a wholly dramatic finale. As always, there’s a little something here for everyone, the sum total made to seem effortless.

Next, we hear the String Quartet in D major, Op. 20, No. 4, dating from 1772. The piece never really catches fire until its third movement, when its gypsy inflections come to the fore. Then the Endellion players give them full measure in the Finale. 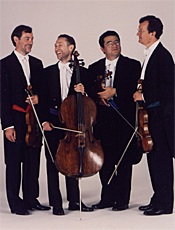 The third item on the disc is the String Quartet in D major, Op. 64, No. 5, from 1790. It derives its nickname, “The Lark,” from the violin tune soaring above the lower instruments. It’s lovely, especially in the hands of the accomplished Endellion musicians, who seem to give it an extra lyricism.

The final two works on the program are brief and incomplete, coming from late in Haydn’s career. They supply an interesting curiosity and show us that even in the face of declining health and an ever-increasing workload, the man could still create music of sublime beauty. The Endellion Quartet do them justice.

Although the engineers for Classic Sound Ltd. recorded the music fairly close up (with a high output on the CD), the location imparts a lifelike resonance to the sound, which comes out appearing smooth, sweet, warm, detailed, and lightly reverberant. The venue was Wyastone Concert Hall, Monmouth, England, and the date was July 10-22, 2012. In fact, the sound is quite impressive, with the instruments well integrated with one another without fanning out across the room yet with plenty of stereo spread and separation. The group sound as one unit while one can identify and appreciate each instrument. As I say, impressive.

To hear a brief excerpt from this album, click below: