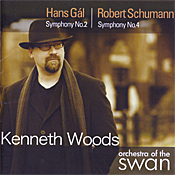 For a lot of potential buyers, it may be bad enough that they have trouble recognizing the name of Viennese teacher, pianist, and composer Hans Gal (1890-1987), to say nothing of trying to figure out why the album under review couples Gal's Second Symphony with the Fourth Symphony of German composer Robert Schumann (1810-1856). Well, actually, the connection is somewhat nebulous but has something to do with people often "misunderstanding" both Gal and Schumann and with Gal having once described the Schumann Fourth as the composer's "most ingenious experiment in form." Fair enough, I suppose, if stretching a point. The main thing is that Maestro Kenneth Woods and his Orchestra of the Swan play both symphonies exceedingly well, which is all we really want.

Gal wrote his Symphony No. 2 in F, Op. 53 in 1943, at a time when the world was in the throes of war and Gal himself was dealing with personal tragedy, the suicide of his eighteen-year-old son. Therefore, the music reflects some of that strife; yet it is mostly serene, contemplative, comforting, lyrical, and occasionally lighthearted.

Maestro Woods and his team play up the more tranquil sections deftly, like the long, slow introduction and the elegiac Adagio. Still, Woods finds himself at home in the sprightly, energetic moods of the second-movement scherzo as well, catching its bouncing rhythms in easy fashion.

The composer said he considered the symphony’s big, central Adagio “more consolation than funeral music,” even though it does have a very solemn tone. Nevertheless, Woods manages to make it quite affecting, quite beautiful, quite graceful; at least until the midway point when the high violins disrupt the tranquility of the setting. This is probably as close as we get in the music to Gal’s private adversities, but Woods does not overdramatize or over sentimentalize it. By the time the finale draws to a close, we recognize, at least in hands of Woods, a memorable and perhaps unfairly underappreciated work. 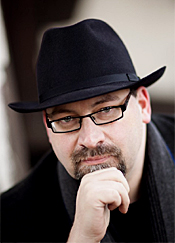 With Schumann’s Symphony No. 4 in D minor, Op. 120, from 1841, we’re on more-familiar ground. Schumann actually wrote it as his second symphony, so it’s still a relatively youthful work, if revolutionary for its time. The interrelated themes and movements make it flow almost as though it were a long, single piece, and Woods does his best to help us hear the interconnected course of the music in this 1852 revised version. While the music remains stormy, tempestuous, rocky, and Romantic, of course, one does notice the similarities in mood and subject matter to Gal’s piece, so I guess the coupling works in its oddball way after all.

Avie recorded the album in December of 2011 at Civic Hall, Stratford-upon-Avon, England. The sound they obtained is nicely dimensional, with both depth and width in the orchestral spread. Although the midrange is not exactly crystalline, it sounds well detailed, smooth, clean, and natural. The hall throws a pleasingly warm resonance over the proceedings, making the music easy on the ear without in any way clouding its definition.

Email ThisBlogThis!Share to TwitterShare to FacebookShare to Pinterest
Labels: Gal