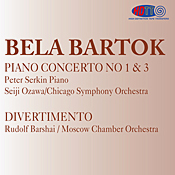 American pianist Peter Serkin (b. 1947) is into his fifth decade of performing, and while he is among the world's leading pianists, he has never quite achieved the intense following his father, pianist Rudolf Serkin, acquired. I suppose that's one of the drawbacks of performing in the shadow of an illustrious parent, unfair as it is. Anyway, on this remastered disc from HDTT (High Definition Tape Transfers), we hear Peter Serkin in one of his earliest recordings, two 1967 performances of Bartok with Maestro Seiji Ozawa and the Chicago Symphony.

The album begins with the Piano Concerto No. 1, written in 1926 by Hungarian composer Bela Bartok (1881-1945). It is not the most smiling work in the world, full of hard edges and blunt percussives. Although it displays much of the coarse dissonance typical of Bartok's work, it also utilizes a good deal of Baroque-style counterpoint. Along with his Concerto for Orchestra, which came much later, the First Piano Concerto remains one of the composer's most popular pieces.

So, how does Serkin handle it? Well, he's an extremely discerning, precise, and somewhat reserved player, so his interpretation is characteristically more reflective than it is edgy or exciting. The problem is, I'm not sure that's exactly what the music needs.

All three movements of the First Concerto seem more leisurely than one usually encounters in Bartok performances, making them perhaps a shade more scholarly than not. In the Andante, especially, Serkin imbues the music with an eerier quality than do most other pianists, taking it at a much slower pace; but that's about the only place his approach works well. One thing he does provide in abundance, though, is contrast, because after the ultraslow Andante, he launches into a pretty heady Allegro. Still, what I missed most was a compelling forward pulse, a building of tension and its consequent release. It is these qualities one finds in Bartok readings from pianists like Stephen Kovacevich (Philips), Zolton Kocsis (Philips), Krystian Zimerman (DG), and Vladimir Ashkenazy (Decca). 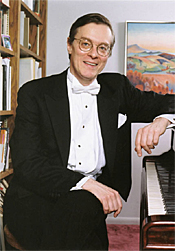 Serkin fares better with the Concerto No. 3, written in 1945, maybe because it is lighter than the First. Bartok wrote the Third at the very end of his life, not even finishing the last few bars, and it might have been his way of showing the world that he had softened considerably from his younger, more defiant days. Here, Serkin, with his studied approach, seems more at home with the composer's newfound melodic normalcy, even if there still appears to be a degree of slackness in the rendition.  Be this as it may, when you factor in the excellence of the HDTT remastered sound, Serkin's Third might be a reasonable consideration for anyone who enjoys Bartok.

Bartok's Divertimento for String Orchestra comes from 1939, and on the present disc we have it performed by Rudolf Barshai and the Moscow Chamber Orchestra. Barshai helps it along with dash and élan in the outer movements and splendid atmosphere in the Adagio. You won't find a better reading than this one, and when you again count in the superb audio quality, you get a top-of-the-line choice in this repertoire.

RCA recorded the Piano Concertos in 1967, and HDTT transferred them to compact disc from an RCA 4-track tape. The sound is a tad forward overall, but it suits the music, and it provides an exceptionally well detailed experience, with plenty of air around individual instruments. The transient response is quick and taut, the piano firmly grounded within the orchestral setting, its attack strongly delineated. While the clarity and exactitude of the sound tend to diminish somewhat the apparent size of the orchestra, a fairly realistic stage depth helps the illusion of one's being in front of a live ensemble. Loud outbursts, cymbals, and triangles emerge impressively, as do all of the percussive instruments for that matter, including the piano.

Decca recorded the Divertimento in 1962, and HDTT transferred it from a London 4-track tape. It may not have quite as much orchestral depth as the RCA production, but it displays a better left-to-right stereo spread, with better fill. It also sounds a shade bright to my ears. Be that as it may, like the RCA recording it exhibits a vivid, vibrant sound, a wide dynamic range, and a potent transient impact.

For information on HDTT discs and downloads, you can check out their Web site at http://www.highdeftapetransfers.com/storefront.php.