David Russell: The Grandeur of the Baroque (CD review) 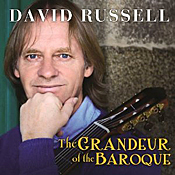 Most people like the music of classical guitar, and there are few practitioners of the art better at it than Scottish classical guitarist David Russell. Maybe it's just longevity. He's been plucking the instrument since his childhood in the 1950's, winning major music awards and the hearts of millions of admirers all over the world. He has been recording since the 1970's, and he's been with Telarc since the mid 90's, this new album, The Grandeur of the Baroque, marking his seventeenth release for the company. Remarkable.

After his having covered the music of most eras, Russell returns to the music of the Baroque period, something he's done on several previous occasions for Telarc. This time, he covers five selections by Bach, six by Handel, four by Couperin, and six more from the less familiar S.L. Weiss, all of them in guitar transcriptions that work better than you might expect. Familiar music or unfamiliar, Russell handles all of it with consummate skill.

The program begins with the Toccata from Partita No. VI in E minor by Johann Sebastian Bach (1685-1750). It's a good curtain-raiser because while it is not extravagantly outgoing, it does afford Russell a chance to demonstrate his dazzling dexterity and prove his virtuosity without tearing the house down. The three Bach Sinfonias (Three-Part Inventions), Nos. 2,11, and 5, prove good counterpoints with their relatively serene, meditative moods.

Next comes the Suite No. 7 in G minor by George Frideric Handel (1685-1759). It puts us into a more directly Baroque world, with Russell taking his time with the music and letting it breathe naturally in a perfectly relaxed yet regal manner. The Sarabande is especially appealing, although for that matter Russell plays the entire suite so well, so brilliantly and elegantly, it's hard to pick a favorite selection. Nevertheless, La Pantomime also stands out. 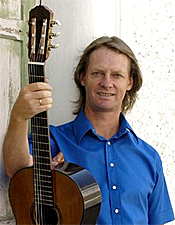 After the Handel, Russell gives us the Twenty-Sixth Suite from Book IV of Pieces de Clavecin by Francois Couperin (1668-1733). These pieces seem more thoughtful, calculated, and contemplative than particularly innovative or memorable. Still, that assessment may simply reflect my own personal biases in favor of German, English, and Italian Baroque music over French.

The program closes with the Suite in D major by Silvius Leopold Weiss (1686-1750), an important composer of lute music in his time. In Russell's hands, the suite begins in a dignified and stately manner and then moves through a series of brief segments of varying temperaments. It's a pleasant and surprisingly catchy way to end the album. Indeed, some of the music sounds positively modern, and all of it sounds delightful.

Telarc recorded the album at Clonick Hall, Oberlin Conservatory of Music, Oberlin, Ohio, and released it in 2012. The sound they obtained matches Russell's performances in clarity, richness, and resonance. While it's only one instrument, it sounds like a whole ensemble on occasion, the acoustic setting and slightly close miking producing splendid results.

Email ThisBlogThis!Share to TwitterShare to FacebookShare to Pinterest
Labels: Baroque