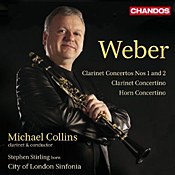 Although the big draws here are the two clarinet concertos, British clarinetist Michael Collins begins the program with the little Concertino for Clarinet and Orchestra, Op. 26, J 109, which German pianist, conductor, and composer Carl Maria von Weber (1786-1826) wrote in 1811. It's a brief but varied piece of music, starting out rather darkly and then opening up to an agreeably light and lyrical set of melodies. Collins has a good time with its differing moods and gets a chance to demonstrate his virtuosity early on. The piece makes a nice curtain raiser.

Next, we get Weber's Concerto No. 1 for Clarinet and Orchestra, Op. 73, J 114, also from 1811. Of the two clarinet concertos Weber wrote that year, this one is the more dramatic (or melodramatic, depending on your point of view). Collins in a booklet note calls it "operatic." Whatever the case, it is decidedly heavy, at least until the clarinet enters and lifts one's spirits. Collins provides a sparkling touch, his clarinet sounding both rich and refined, the City of London Sinfonia lending a splendidly intimate, small-scale support. The second-movement Adagio is especially lovely, and the finale bubbles over with a zippy enthusiasm.

After that, we get a change-up: the Concertino for Horn and Orchestra, Op. 45, J 188, with Stephen Stirling, horn. Weber was only nineteen when he wrote it, a remarkable accomplishment, even if he did revise it extensively about nine years later. Stirling offers meltingly mellifluent sounds and an equally honeyed interpretation through the four-movement piece. 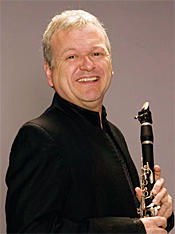 The program ends with what is surely one of Weber's most-popular works, the Concerto No. 2 for Clarinet and Orchestra, Op. 74, J 118. Like most of the world, I love this music, so it's hard for any clarinetist to go wrong. Collins doesn't disappoint. In fact, he is quite dazzling from the moment he enters. A tone of mystery and grief pervades the second-movement Andante, to which Collins adds a note of melancholy. Then the whole show closes in a sparkling display of pyrotechnic fireworks from Weber, Collins, and the orchestra. It's all scintillating and delightful, and while I may have other favorite recordings of both concertos, this new one from Collins and company must stand serious consideration.

Chandos recorded the album at St. Jude-on-the-Hill, Hampstead Garden Suburb, London, in April of 2011. They obtained a big, well-integrated sound, the clarinet never too close or too distant, with the orchestra realistically spread out behind. The sonics are smooth and slightly warm, making for easy, comfortable listening, if not always allowing for ultimate transparency or dynamic contrasts. There is good stage depth, too, and a pleasantly resonant air further contributing to the illusion of hearing the music in a mildly reverberant concert hall.

Email ThisBlogThis!Share to TwitterShare to FacebookShare to Pinterest
Labels: Weber