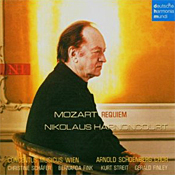 Although this disc came out a few years ago, 2004 actually, I thought since I had recently reviewed several newer Mozart Requiem recordings, I'd throw this one in, too.

Nikolaus Harnoncourt, a pioneer in the early-music movement, is obviously an old hand at reinterpreting classical music from a so-called authentic point of view, most often on period instruments, so it comes as no surprise that he would return to Mozart's Requiem once more, this time with his own Concentus Musicus Wien. Using the version completed by Mozart's copyist, Xavier Sussmayr, as amended more recently in the new critical edition by Franz Beyer, Harnoncourt produces a ready answer to those who would suggest that nobody can do anything new with the old warhorse.

The conductor tells us in a booklet note that he quit performing in an orchestra to begin leading his own band when he decided he just couldn't play things like the Requiem in "harmless, sugary interpretations" anymore. His present performance, therefore, is vibrant, spirited, emblazoned with fiery color, his orchestra and his soloists--Christine Schafer, Bernarda Fink, Kurt Streit, and Gerald Finley--encouraged to produce an impassioned response. 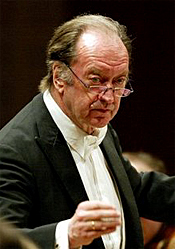 This is not say it entirely eclipses several other similarly animated accounts, like the one with Claudio Abbado and the Berlin Philharmonic that came out just shortly before it, but because Harnoncourt's players are miked a little closer and because his group is quite a bit smaller and play on period instruments, the results tend to get us closer to the action and move the adrenaline faster. Abbado, on the other hand, is not really any more expansive than Harnoncourt, but as the sound is so much bigger, it seems broader in every respect. They are both good, lively interpretations, both recorded live, I might add, and the choice between them might not be easy to make despite their different approaches. I tend to fancy the new Harnoncourt recording despite some odd balance discrepancies in the choral-orchestral settings and its being made live, something I don't usually care for; luckily, his audience is quiet and unobtrusive. The big "however" is that I personally prefer several other period-instruments presentations to this one (see "The Basic Classical Collection"), so the matter for me is moot in any case.

Interestingly, another note in Harnoncourt's disc booklet goes on at length about how there is no actual "Mozart Requiem" and people should not call it such because the man never finished it, other hands, like Sussmayr's, Beyer's, and Harnoncourt's, revising it many times over. Nevertheless, the CD labels this recording Mozart: Requiem. Go figure. Also of interest, Deutsche Harmonia Mundi issued the music on both an SACD hybrid disc (double layered, two-channel and five-channel) and a regular stereo disc. I listened to the two-channel stereo layer of the SACD, presumably identical to the stereo issue and pretty much liked what I heard, be it live or not.