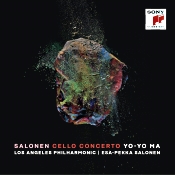 Esa-Pekka Salonen is perhaps best known to American music fans as a conductor. He led the Los Angeles Philharmonic from 1989 through 2009  (their recordings of Debussy and Mahler are highly recommendable productions) and will take over the musical directorship of the San Francisco Symphony Orchestra in 2020. But Salonen is also a composer. In this new Sony Classical release he is featured in both roles, leading the Los Angeles Philharmonic and superstar cellist Yo-Yo Ma, for whom the piece was written, in a performance of his Cello Concerto. This is the world première recording of the work, captured by the Sony engineers from a live concert performance on February 8, 2018.

The cover illustration depicts some sort of space rock surrounded by a cloud of smaller pieces of space debris. This mysterious space object (shades of Weather Report's Mysterious Traveler) is illustrated again from different perspectives on the cover and centerfold of the booklet included with the CD, in which Salonen discusses the origins and conceptual/compositional framework of the piece. The significance of the space rock and its attendant cloud is explained by Salonen as he writes of the first movement: "I imagined the solo cello line as a trajectory of a moving object in space being followed and emulated by other lines/instruments/moving objects. A bit like a comet's tail… Sometimes the imitating cloud flies above the cello, sometimes in the very same register."

One of the fascinating aspects of the concerto is the way Salonen varies the ways by which the three movements begin. The first movement (the three movements are denoted simply as I, II, and III, with no descriptors) opens right in the middle of things, as though the orchestra had already started playing and only then were the microphones switched on. After a couple of minutes of whirling and swirling notes from the orchestra, the cello begins to play, and then after a couple of more minutes, Maestro Ma truly brings the cello part into the musical forefront with some beautifully lyrical passages – mysterious, plaintive, shifting lines that are at times echoed the flute, other times by the oboe, evoking true senses of wonder and affording credibility to Salonen's description of an object in space accompanied by its fellow travelers.

In contrast to the twittering opening of the first movement, the second movement begins with an emphatic orchestral chord. The cello part in this movement also contrasts with those of the previous movement, as Ma leans harder into the strings, beginning slowly in the lower registers at first but then shifting upward toward the middle and higher registers and faster speed as the movement progresses and the overall energy of the music increases, at times joined by an alto flute that swirls around the cello melody and contributes to the imagery of celestial travelers.

The third movement begins without a clear break from the second as Ma plays a solo part, again in the lower register to begin. He is then joined by various percussion instruments, bringing a much different texture from what has gone before. In the liner notes, Salonen writes of a section where he "imagined the orchestra as some kind of gigantic lung, expanding and contracting first slowly, but then accelerating to a point of mild hyperventilation which leads back to the dance-like material." (Hmmmm – at any rate, I can see why the folks at Sony decided to go with the comet rather than the giant lung for the cover illustration…) After some final frenzied interaction between hand drums and cello, the movement and of course the concerto as a whole ends with Ma climbing as high as he can reach into the treble notes of the cello, ending with what Salonen describes as "a stratospherically high B-flat, two centimeters to the left of the highest note of the piano."

The effect of this ending is haunting, reinforcing the mental imagery of the comet traveling somewhere in deep space. It is as if we suddenly saw it coming, delighted in watching it and its accompanying cloud of debris as it made its way across our field of vision, only to see it travel out of sight as it continued its seemingly endless cosmic journey.

I do hope I have not made this recording sound in any way forbidding. It is not. If anything, it is highly engaging. Rest assured it is not atonal. No, Salonen is not Tchaikovsky, but he has worked some beautifully lyrical passages into this intriguing composition. In addition, the quality of the recording (captured live in concert) is first-class. The only negative I can see about this CD is its length, which is barely over 35 minutes. I hope that does not dissuade anyone from giving this disc a listen – this is a truly rewarding recording of a truly wonderful piece.

Email ThisBlogThis!Share to TwitterShare to FacebookShare to Pinterest
Labels: Salonen