On Power Amplifiers and How Much Power

The power amplifier needs to accurately amplify (apply voltage gain to) the incoming signal, and deliver that amplified signal, fully in tact, to a designated low impedance load. The power amplifier is not supposed to alter or reshape the input signal in any other manner, so optimum accuracy can be enhanced when the potential for error (a.k.a. distortion) is effectively suppressed.

Given this state of modern amplifier excellence, it’s unrealistic to expect equivalent accuracy from vacuum tube dependent design. The archaic limitations of the triode tube (Lee DeForest, 1906) are not consistent with contemporary medians. Ruler-flat power response, near-zero (<  0.1%) total harmonic distortion (THD) at full rated power, and ultra-low output impedance (~ 1/10th the Zout of a typical tube amp) is now routine in the case of most solid-state power amplifiers. Identical measurements made on the very best vacuum tube models show that they can’t approach the same readouts. For example, consider THD: Typical “high-end” tube-type audio power amplifier THD limits are ~ 16X to 50X worse than as specified for a popular “mid-market” solid-state power amplifier.* (They’re 1% to 3% THD instead of 0.06% max.) That’s undeniable regression. Of course, tube boosters assert that this shortcoming is actually beneficial. They claim that vacuum tube amps will thereby render a warmer, more euphonic (?) sound. Given this Zen-infused perception, tube power amplifiers can seemingly transcend their intended role and become creative (but arbitrary) signal processors. This uncontrolled mutation is not consistent with the initial (accuracy) objective. 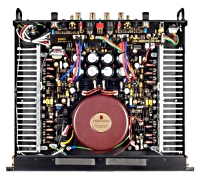 I recommend a power amplifier that can accurately replicate the input signal, and do so with sufficient power to deliver some +2 dB to +3 dB more unclipped drive than your speakers can tolerate. A speaker system’s safe operating range is defined by its “maximum unclipped power input” limit. The application of some +2 to +3 dB margin for power amplifier output will then assure that your speakers never see a clipped (potentially destructive) input signal that’s within the speakers’ safe operating range. E.g.: If your loudspeakers are able to accept unclipped power input ≤ 80 Watts, then your power amplifier should be able to provide unclipped power output ≥ 127 Watts (+2 dB) or ≥ 160 Watts (+3 dB). In this example, do take note that the cited power levels may be appreciably more than many tube-type power amplifiers can produce. Vacuum tube power amps are wimpy, as well as grossly inefficient.

Apply that “euphonic polishing” later, at the loudspeaker stage. The speakers’ performance will be inseparably linked to the acoustic characteristics of your listening room, so it’s sensible to address both of those issues together—without the need to compensate for anomalous amplifier sound.