"I want real things--live people to take hold of--to see--and talk to--music that makes holes in the sky--I want to love as hard as I can." --Georga O'Keefe 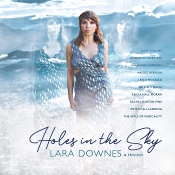 Ms. Downes, as always, shows extreme care in nuance and suggestion, with playing that is at once tender yet strong and moving. The music itself is touching, pensive, contemplative, and inspiring by turns and easily bears repeat listening. It's nice to hear Ms. Collins sounding the same as ever, too, her voice perhaps a touch huskier but no less distinctive and expressive. The other soloists are equally impressive and the whole affair is lovely, with perhaps Jennifer Higdon's work standing out the most for its serious intent and accessible feel. What's more, the album totals sixty-seven minutes of material, far more than a typical popular album might. But, then, this isn't typical popular material, either. Nor is it a "woman's" album, even though the composers are women. It is an album for all seasons, all tastes, all people, all ages, and certainly all genders.

As we should expect, there is some variation in sound reproduction depending on the particular studio used. Most of the sound, though, is typical of pop studio productions: close, detailed, well spread. Other selections, like the songs with Judy Collins and Leyla McCalla and the piece with Rachel Barton Pine sound a bit more natural, with a tad more air around the soloists. Suffice to say, all of it sounds fine and none of it will disappoint.

Addendum: Shortly after I finished this review, my wife heard the album and immediately took proprietary possession of it. It now resides among the music collection in her car. Well, at least I know where to find it the next time I want to listen.

Email ThisBlogThis!Share to TwitterShare to FacebookShare to Pinterest
Labels: Downes