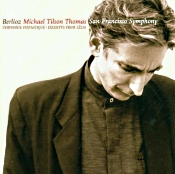 Rule of thumb: Never trust an album that features the conductor's face on the cover. Not to imply such here, but too often it signals a vanity piece. Michael Tilson Thomas has his picture on the cover, on the back of the booklet, on the back of the jewel box, and again in the booklet itself. Not only that, his name is twice as big as the name of the work he is conducting. Enough said.

The performance has to be good to justify that kind of promotion and to compete in a standard repertoire item like French composer Hector Berlioz's Symphonie fantastique that already has a multitudinous assortment of discs at its service. With old favorites from Sir Colin Davis (in three different recordings), Sir Thomas Beecham (EMI/Warner), Leonard Bernstein (EMI/Warner), Roger Norrington (EMI/Virgin/Erato), John Eliot Gardiner (Philips/Decca), and a host of others well established, MTT's interpretation would have to be awfully good. It is good. But it is not awfully good.

The second movement waltz is particularly noteworthy, having a wonderful lilt that is quite infectious, and the third movement, which I have always found more than a little tedious, actually kept my attention. The real sonic showcases, however, "The March to the Scaffold" and "The Witches' Sabbath," come off as rather routine, despite MTT's sometimes quirky phrasing and ultrawide dynamics. Refer to Beecham and Bernstein for color and character.

On the other hand, the accompanying twenty minutes of excerpts from Lelio (or "The Return to Life"), Berlioz's follow-up to the Symphonie fantastique, are a major plus. Shorn of its bizarre narration, as it is here, Lelio better holds one's attention; it is both entertaining and engaging.

And the orchestra gets good support from the San Francisco Chorus, if not from the sound engineer in charge of enhancing the Chorus's dynamic range. Speaking of which, RCA's sound is clean, deep, and smooth, though somewhat lacking in ultimate definition and imaging. The whole affair gets a B- rating from me, among aforementioned recordings that merit A's. You be the judge.