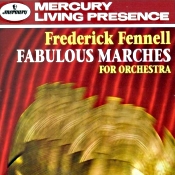 Ever wonder why record companies keep some things locked away for so long? Saving up fabulous fare for a rainy day, maybe? Well, in California it rained all spring, and these marches are, simply, fabulous.

Originally produced in 1959-60, the recording makes most modern digital issues hang their head in shame. The sound has enormous dynamic range and, more important, dynamic impact. Bass is prodigious, midrange is clean, highs are clear and airy. It is done rather close up, and while depth is somewhat lacking, there is a very wide stereo spread. The only concession to age is some small background noise, most noticeable on the final two items, recorded a year earlier than the others.

The marches include mainly classical ones: Walton's "Orb and Sceptre," Beethoven's "Turkish March," Sibelius's "Alla Marcia," Borodin's March from Prince Igor, Schubert's "Marche Militaire," Grieg's "Homage March," and Wagner's "Tannhauser March," Rienzi Overture, and "Good Friday Music."  The latter two marches are done by Maestro Frederick Fennell and the Eastman Wind Ensemble and really need the weight of a full symphony orchestra behind them, but the added clarity of the smaller wind group is a pleasant change.

In the old days, we would have called an album like this "demonstration material." But, of course, we are older and more sophisticated now and don't trot out stuff just to impress friends. Oh, we do? Then this is just the stuff to demo.


To listen to a brief excerpt from this album, click below: