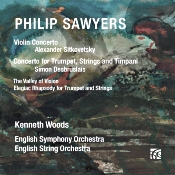 British composer Philip Sawyers (b. 1951) has found some of his major fame no doubt from the Nimbus recordings of his works conducted by Kenneth Woods, with four discs now available. In 2015 the English Symphony Orchestra, of which Woods is Artistic Director and Principal Conductor, appointed Sawyers their John McCabe Composer in Association, with various commissions including a song cycle, the violin and trumpet concertos found here, and several symphonies, of which I reviewed the Third a year or so ago.

Sawyers's Web site informs us that his "works have been performed and broadcast in many countries worldwide including the USA, Canada, Spain, Austria, Czech Republic, France and UK." Music-web International described his orchestral work as "music of instant appeal and enduring quality."

So, on the present disc we get two longer Sawyers pieces of almost thirty minutes each and two slightly shorter pieces. It seems to be a good representation of the man's output, which runs high to somewhat dark, moody, sorrowful, yet completely accessible, never sad tunes.

The program begins with the Violin Concerto, completed in 2016, with violin solo by Alexander Sitkovetsky and accompanied by Maestro Woods and the English Symphony Orchestra. Sawyers is also a violinist, and when Woods suggested he do a violin concerto, he jumped at the opportunity. The piece opens with a theme from Sawyers's Third Symphony, so it may sound familiar. To be honest, though, as I said above, Sawyers's music often appears dark and moody to me, so it all tends to sound familiar.

Anyway, the violin dominates the proceedings, as expected, alternating agitated solo passages with tempestuous dialogues with the orchestra. Woods has a good instinct for where the soloist is going, too, and the two work seamlessly together. The opening movement ends calmly, leading into a melodically reflective Andante touched by melancholy. Again, the violin towers above the orchestra, sounding ever more unsettled as the music moves along, reaching a final movement that is surprisingly playful. Sawyers describes it as all "hustle and bustle" and tells Woods "the violin is my instrument, and if it didn't make me happy, it will have been a bit of a waste to have played it my whole life." It's all quite attractive, with Mr. Sitkovetsky playing brilliantly and Woods and the English Symphony supporting him with conviction.

Next, we get The Valley of Vision from 2017. It is Sawyers's musical response to some of the paintings of English artist Samuel Palmer (1805-1881), which themselves represented the countryside around Palmer's home in Shoreham, Kent. Sawyers tells us he did not intend for the five sections of the work to be programmatic but, instead, I guess more impressionistic. Here, Sawyers sounds more than ever like the English pastoral composers of the previous century--Arnold Bax, perhaps, Frank Bridge, Frederick Delius, Percy Grainger, Ralph Vaughan Williams, and the like. In any case, the music is lovely and evocative.

And so it goes with the Concerto for Trumpet, Strings, and Timpani (2015), with trumpet solo by Simon Desbruslais and accompaniment by Woods and the English String Orchestra (the English Symphony Orchestra began as the English String Orchestra in 1978, and as their repertoire expanded the orchestra grew larger and today performs under both appellations as the occasion demands). As one might expect for a combination of trumpet and timpani, the music is more dramatic, more martial, and more aggressively rhythmic than anything else on the program. Still, there's a charming central movement that is both lyric and ardent. Certainly, it is well performed by everyone involved, yet it failed to affect me the way the violin concerto did, perhaps because of its blunter edges.

The agenda concludes with the Elegiac Rhapsody for trumpet and strings (2016), performed by Desbruslais, Woods, and the English String Orchestra. The work's title aptly describes its content, the work commissioned as a remembrance of the death of British composer and pianist John McCabe (1939-2015). Although on a more somber level, this final piece sounds almost like a continuation of Sawyers's trumpet concerto and could probably have as well served as the slow movement. Whatever, it is a radiant tribute to McCabe, performed with discernable compassion.

Producer, editor, and engineer Simon Fox-Gal recorded the first four tracks at Hereford Shirehall in February 2018; producer, editor, and engineer Adam Binks recorded tracks five through eight at the Church of St. George's, Worcester in October 2017. The folks at Nimbus have always produced good sounding recordings, and this one continues the pattern. It seems a tad closer than most of their work, especially the solos, but it delivers excellent clarity, with a fine sense of depth and space. Detailing is fine as well, accompanied by a realistic but not overpowering dynamic range and impact.

Email ThisBlogThis!Share to TwitterShare to FacebookShare to Pinterest
Labels: Sawyers