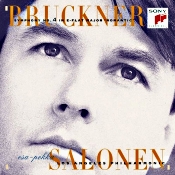 Bruckner tried to write a literary program to go with his Fourth Symphony. For the First Movement he wrote: "A citadel of the Middle Ages. Daybreak. Reveille is sounded from the tower. The gates open. Knights on proud chargers leap forth. The magic of nature surrounds them." But by the last movement he admitted, "...I've forgotten completely what picture I had in mind."

It doesn't matter. Even without the composer's program, the "Romantic" Symphony conjures up visions of beauty, grandeur, and majesty aplenty for all but the least imaginative listeners. Although Esa-Pekka Salonen's 1998 Sony release with the Los Angeles Philharmonic is perhaps too dependent upon his trying to convey the grandness of the music to lay claim to top honors, one cannot fault him for trying hard in admittedly so grand a work.

Still, Salonen has some tough competition in this piece. Eugene Jochum (DG or EMI) does a better job conjuring up the mysticism of the nature motif; Otto Klemperer (EMI) holds the structure together better; and Karl Bohm (Decca) is probably best at maintaining the work's forward momentum. Salonen takes the slowest route; at almost seventy minutes long, the music tends to lag, and one wants to give the maestro a little nudge in the behind from time to time. Salonen tries heroically to sustain every note, mark every contrast, and coax the last ounce of splendor from the score, but he tries a little too hard. In the end, I was moved more by what the interpretation could have been than by what it was. Still, Salonen's effort is noble, and it's really hard not like Bruckner's lovely score no matter whose hands it's in.

Sony's sound, recorded at the Dorothy Chandler Pavilion, Los Angeles, CA in May 1997 is big and full, with an enormous dynamic range. If Sony had made the recording in the really old, analogue days, Salonen's softest passages would have probably sunk beneath a surface of tape hiss. Here, in digital, the contrasts are splendidly dramatic, even if they appear more the work of the audio engineers than the conductor. Overall, too, the sound is a little dark and murky compared to, say, Klemperer (EMI) or Blomstedt (Denon), both of whom open up the stage more and allow us to hear further into the orchestra.

For the Bruckner fan and the Bruckner collector, I can recommend Salonen with little hesitation. For the first-time Bruckner buyer, however, maybe Klemperer, Bohm, or even the old Bruno Walter recording (Sony) would be safer places to start.