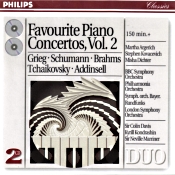 I have often written on this site about fabulous buys, bargains among bargains, things like the Beethoven Fifth and Seventh Symphonies with Carlos Kleiber on a single DG Originals or the Dvorak Seventh, Eighth, and Ninth Symphonies with Sir Colin Davis in a Philips Duo set, each of which packages two or three great performances on one or two mid-priced discs. Well, this particular Philips Duo, issued by the company in the late Nineties, may have even them beat.

Of the five concertos on the two discs, there are three works--the Grieg, Schumann, and Addinsell--that are number-one choices in my book. And the other two recordings--the Brahms and Tchaikovsky--are among a handful of my top choices. In fact, I have been recommending most of these items for years. Here, they all come for the cost of a single mid-priced set. Incredible.

The Grieg and Schumann concertos with Stephen Kovacevich are outstanding, and until this release they were available only at full price. The sound is slightly warmer than necessary for good definition, but it is more than acceptable.

The Brahms, also from Kovacevich, is as powerful and lyrical as one could ask for. I believe it even beats Kovacevich's later EMI recording in performance, if not in sound, which is only slightly less warm and soft than the aforementioned Grieg and Schumann. Second only to Gilels on DG, Kovacevich's Brahms is the one to own, and now you can have it along with four other great performances.

Martha Argerich's Tchaikovsky First Piano Concerto is probably a first-choice for many people. I still think her earlier account on DG is more satisfying, as is Cliburn's on RCA, but there is no doubting that this live Philips performance is more energetic than the others. And it's pretty well recorded, too, despite its being live.

Finally, the little, one-movement Warsaw Concerto from Richard Addinsell, composed for the 1941 film Dangerous Moonlight, has seldom gotten such good treatment as this one from pianist Misha Dichter and Sir Neville Marriner, and the sound here is the best of any in the set.

All of the recordings derive from the Seventies and Eighties, and all of them have already withstood the test of time. This particular incarnation should have already won them some new fans, and I hope it continues to do so.