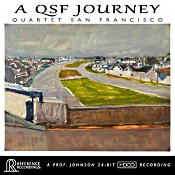 If I may quote from Wikipedia: "Quartet San Francisco is a non-traditional and eclectic string quartet led by violinist Jeremy Cohen. The group played their first concert in 2001 and has recorded five albums. Playing a wide range of music genres including jazz, blues, tango, swing, funk, and pop, the group challenges the traditional classical music foundation of the string quartet.

"Quartet San Francisco won a tango music competition in New York in 2004, and their albums have been nominated five times for Grammy Awards: three in the Best Classical Crossover Album category and two for Best Engineered Album, Classical."

The group's current members are Jeremy Cohen, violin; Joseph Christianson, violin; Chad Kaltinger, viola; and Andres Vera, cello. They are consummate performers and work harmoniously with one another to form one of the most-accomplished and most-versatile quartets in the business. On the present album they play what they call "the spirit of our time," twelve relatively new tunes running high to tangos, most of them written or arranged by Mr. Cohen.

Here's a rundown on the program:

The Argentine tango takes center stage in the first track, "Tango Eight," with lively rhythms introducing us to the QSF style. The quartet follows it with an even livelier tune called "Fiesta" by Helmut Lipsky that is quite exciting. For a change of pace, the group have chosen a more leisurely piece called "Tango Carnevale," which is a sort of slow tango. Cohen says he wrote it after spending evenings in the neighborhoods of Buenas Aires. It's lovely.

And so it goes. The QSF play wonderfully well together, seeming to sense one another's movements instinctively and moving together as a whole, yet all the while emphasizing the unique contributions of each member. Thus, although each of the four musicians is a distinct individual with his own style, the combined result is one of effortless unanimity. They play together separately and together simultaneously.

Favorites? Yes, twelve of them. However, if forced to choose just one, I'd say "Rhapsody in Bluegrass," a combination of Gershwin's "Rhapsody in Blue" and Ervin T. Rouse's bluegrass fiddle favorite "Orange Blossom Special." Classical, jazz, and bluegrass: What could be more natural, and what could go wrong? That nothing goes wrong and everything goes right is remarkable. "La Heroina" and "How Sweet the Sound" I also found effective in quite different ways, but to quibble about favorites in so entertaining an album would just be...quibbling.

Let's call this one of my favorite albums of the year and be done with it.

Producers Victor Ledin and Marina A. Ledin, executive producer Marcia Gordon Martin, and engineer Keith Johnson recorded the music at Skywalker Sound, Nicasio, California in May 2018. As we might expect from a small ensemble in an ideal setting, their HDCD sound reproduction is as lifelike as one could want. The clarity is astonishingly good, the spacing exemplary, the air and ambience realistic, the dynamics strong. Perhaps some listeners might prefer a more distanced approach to the miking, but there is certainly a greater transparency to the QSF sonics with the slightly closer approach Reference Recordings has taken. Whatever, this is audiophile quality sound in almost every way.