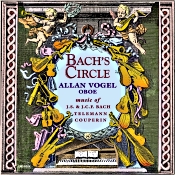 Oboist Allan Vogel reminds us in his booklet essay that, "In his mature years, Johann Sebastian Bach's circle of family, friends, students and colleagues was a large one. Bach was known to be a hospitable man who would often have concerts for this extended family in his home. Such a concert is the inspiration for this recording."

Of course, Bach may not have had Couperin in his own house, but his influence on Bach's work would have been considerable. Telemann, on the other hand, was the godfather to one of Bach's sons, so his impact was both personal and musical.

Anyway, the present disc begins with Telemann's Trio Sonata in E-flat Major and then goes on to Bach's Sonata in G Minor, BWV 1020, and Sonata in G Minor, BWV 1030b, the former much simpler and shorter than the more elaborate later work. The centerpiece of the program is Couperin's Concert Royal No. 4 in E Minor, an elegant set of dances; and the concluding work is son J.C.F. Bach's Sonata in C Major, the blithest and merriest of the sonatas, which makes a fitting conclusion to the agenda.

I had not heard a Delos recording of chamber music before this one, released in 1998, and I was impressed by the clarity and definition the engineers brought to the sound, without sacrificing much in the way of natural room acoustics. They recorded the group a bit close for my taste, it's true, and the imaging does not allow for much front-to-back perspective (not that that matters so much with so few players), but other than that it is fairly realistic.

This is the kind of album that makes for either undivided primary listening or relaxing background music. Seems almost a shame, though, to waste it on background alone.