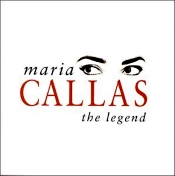 The American operatic soprano Maria Callas (1923-1977) may still be the most recognizable female name in opera, almost a quarter century after her death. Although she was quite versatile, singing in French, German, and Italian, she is known today primarily for her French and Italian roles, which are well represented on this collection of her art. She was also known for her volatile disposition and the notoriety of her lifestyle, but that's another story. The questions is, Was she really the greatest female soprano of all time? One can only say, maybe. Personal taste dictates the answer.

Certainly, one could make the case that Callas should come somewhere near the top of any list of great singers. And another thing seems clear: she probably did not possess the most dynamic, lilting, precise, or beautiful voice of all time. Those titles might go to other contenders. What is equally clear, however, is that no other soprano in modern history interpreted a song quite like her. By the time she retired, she had performed over forty separate roles and had recorded something like twenty operas.

The booklet insert provides a good example of her singing style. When a reporter once asked her after a film appearance, "So you have decided to start out on a career as an actress," she replied that she thought she had always been one. Yes, above all she was an actress, a dramatic singer who could transform herself into the character she was performing and convey the character's emotions through the words. She was not simply singing; she was being.

The seventeen arias on this recital disc, among the best she ever recorded, are good examples of her ability to transcend the mere lyrics of a song and create a genuine persona. Listen to the first item, Bellini's "Casta Diva" from Norma, and you'll see what I mean. There follow songs from Catalani, Rossini, Donizetti, Puccini and Verdi, of course, Saint-Saens and Bizet. Trust me in saying you will recognize all of them; they are standard repertoire fare like "Un bel di vedremo," "Si, Mi chiamano Mimi," "O mio babbino caro," and the like. Each is exquisite; each a gem.

EMI's sound varies from mediocre to above average in these remasters, now available from Warner Classics. Remember, these recordings were taken from the mid Fifties on. Most are in monaural, but like "Vissi d 'arte" from Tosca, it is quite good mono sound. My only complaint is that the EMI engineers occasionally seem to have applied a little too much noise reduction, softening the high end more than necessary. Most of the tracks evidence a degree of hardness or roughness, but it is not extreme, and if you love music you won't even notice. Strongly recommended.

Email ThisBlogThis!Share to TwitterShare to FacebookShare to Pinterest
Labels: Callas