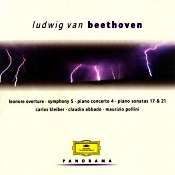 This two-disc set began DG's second series of "Panorama" double albums, featuring some of the company's best older recordings of Beethoven. Like many others in the series, these discs offer some magical and highly persuasive moments at a relatively low price. It remains a bargain and a must-have if you don't already have these performances in your library.

The program begins with the Leonore Overture, performed by Claudio Abbado and the Vienna Philharmonic, recorded in 1991. The performance displays commendable energy and drive, but finds flaw in its mediocre, curiously lifeless sound.

Following the overture on disc one is the Fourth Piano Concerto with pianist Maurizio Pollini and conductor Karl Bohm with the Vienna Philharmonic. Pollini's playing appears a bit distant but as always his craftsmanship and precision are without peer. The recording, made in 1976, is fuller, warmer, and more ambient than the later Abbado productions and provides a more comfortable listening experience.

Disc one concludes with what is perhaps the most famous and most critically acclaimed recording of the last forty or fifty years, Carlos Kleiber's 1975 rendition of the Fifth Symphony, also with the Vienna Philharmonic. The set would be worth its price for this electrifying and emotionally charged performance alone. On a side note, DG also offer this Fifth Symphony in their "Originals" series of single discs, coupled with Kleiber's excellent interpretation of the Seventh Symphony.

Disc two begins with a pair of piano sonatas, No. 21 "Waldstein," and No. 17 "The Tempest." Both find pianistic perfection in a 1989 recording by Maurizio Pollini. The lineup concludes with the String Quartet in C major, Op. 59, No. 3 "Razumovsky." Recorded in 1997 by the Emerson String Quartet, it is immediate in sound and evocative in spirit.

Given that so many record companies are repackaging older material these days, it's good to see DG doing so with such good taste, creativity, and generosity. What's more, given that DG first issued this set some years ago, one can find it at a ridiculously low price new or almost nothing used. You won't find better value anywhere in the world of recorded music.