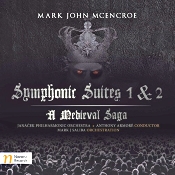 Australian composer and pianist Mark John McEncroe (b. 1947) began his career in music working in his early twenties and thirties as a label manager for EMI Records in Australia and Sweden. It was during this time that he also took up piano, trumpet, flute, and clarinet, mainly as a hobby but later in depth. It wasn't until 2003 that he began studying music theory and composition, and since that time he has composed a number of works and recorded an equal number of albums. While his usual approach (including the current album) has been to write the scores for piano and then collaborate with Mark J. Saliba, who would orchestrate the pieces, he is currently studying orchestration, perhaps to do more of the work himself.

McEncroe began writing the Symphonic Suites 1 & 2: A Medieval Saga in 2007, originally entitling them "A Modern Medieval Tale" (now "Just Another Medieval Tale") and the second "And The Medieval Tale Continues," perhaps hinting that there are more "medieval tales" to come. Even though McEncroe regards the two works as "symphonies with a story to tell," he was probably right in labeling them suites because that's pretty much what they are: two series of program music describing life in medieval times. In this regard they reminded me of Prokofiev's Romeo and Juliet (if you substitute Renaissance for medieval), and, indeed, the composer is currently developing his suites into a ballet. Of course, the suites may also remind some listeners of film music (here, for example, Prokofiev's Alexander Nevsky comes to mind), and perhaps even a score for an Arthurian epic. Understand, I only mean this observation as a compliment as the music is quite graphic.

The titles of the various movements may give you a better idea of their content.

Suite No. 1:
1. Entrance of the King
2. Strutting Peacocks - Hangers on at Court
3. Rising Discontent
4. Peasants Uprising
5. An Uneasy Truce
6. A New Way Forward
7. The Quest - A Search for Truth

Each suite is a little over forty minutes, so together they are a bit too long to accommodate on a single CD. But not to worry: Navona Records offers the two-disc set for the price of one, so everyone is happy.

Anyway, the section titles tell it all. The music describes a series of dramatic scenes from medieval life, mainly conflicts and turbulences among the ruling classes. There's a lovely lyricism to the slower segments that one can see would lend themselves nicely to ballet. The battle sequences also work well, developing an appropriate intensity.

And so it goes. The orchestration is often lush and romantic. The Janácek Philharmonic do a splendid job articulating the various degrees of ardour and periodically feverish passion the score requires. And Maestro Anthony Armore manages to keep it all of one piece, as the score does tend to go off in different directions on occasion.

I can't say the music impressed me overmuch with its originality, however, because by the time I finished the first suite, I wasn't quite ready for a sequel. Fortunately, the second suite actually comes across as more innovative, more creative, more tuneful, and more atmospheric than the first. I can't help wondering, then, if it wouldn't have been better for McEncroe to have synthesized a single suite of numbers from the two suites. At about an hour, he might have something important here. In the meantime, we look forward to the upcoming ballet he has planned for the music.

The album's producer and engineer, Jaroslav Zouhar, recorded the two suites at The Hall of Culture, Ostrava, Czech Republic in June 2015 and January 2016. There is sometimes a rather bright, edgy upper midrange response in the first of the suites that tends to dominate the music, but if you can get past that, things are fairly neutral. Clarity is OK if a bit steely, as I say. Good depth of field helps with realism, as do strong dynamics. Hall resonance sometimes appears just right and at other times appears a tad too reverberant and tubby. Mid bass is full and round, providing a comforting warmth to the proceedings. Most of the time the sound is natural and lifelike, especially in the second suite, which I not only liked more for its musical content but sounds better recorded to me.

Email ThisBlogThis!Share to TwitterShare to FacebookShare to Pinterest
Labels: McEncroe