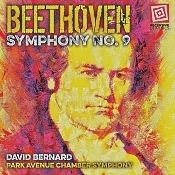 If you're like me (heaven forbid), you may view Beethoven's Symphony No. 9 as the epitome of big-scale classical music. So it might give you some slight pause to consider the symphony played by a chamber orchestra. You might have even more doubts to learn that the Park Avenue Chamber Symphony comprises mainly players who do other things for a living (hedge-fund managers, philanthropists, CEO's, UN officials, and so on). They're not exactly amateurs, but they're not full-time, paid musicians, either. Fortunately, one listen to their playing should dispel any lingering skepticism. Everyone involved with this current production deserves praise.

Not that the Park Avenue Chamber Symphony is a particularly small ensemble. It just isn't the size of a full symphony orchestra, and no matter how well they play, you won't mistake them for the Concertgebouw Orchestra or the Berlin Philharmonic. In fact, in the final movement the solo and choral forces (Kristin Sampson, soprano; Edith Dowd, alto; Cameron Schutza, tenor; Brian Kontes, bass; New Amsterdam Singers, the West Point Glee Club, and the Young New Yorkers' Chorus) must outnumber the orchestral players two to one. Nevertheless, the New Yorkers play with enthusiasm, and Maestro David Bernard leads them with gusto.

Did I say "gusto"? I mean, Bernard really has them zipping along. Remember back in the early days of CD, we heard that Philips and Sony, the cofounders of the format, decided upon seventy-five minutes as the limit for content (although some CD's now contain a little over eighty minutes) because seventy-five minutes would accommodate the average length for the Beethoven Ninth Symphony? Well, Bernard's performance leaves plenty of room on the disc to spare. I compared his timings for all four movements to Roger Norrington's historically informed performance, which uses Beethoven's own metronome marks (for better or for worse, depending on your attitude toward the reliability of the markings), and Bernard's sixty-five minute mark is almost as fast. So, yes, this is a zippy reading.

The first thing one notices about the performance is that the fairly small size of the ensemble provides a cozier, more intimate style than many of us may be used to. I still miss the big-scale approach, but the inner detail this one provides compensates in part.

Anyway, the first two (orchestral) movements roll along with a zesty fervor, thanks largely to Maestro Bernard's obvious love of the subject matter and his keen desire to communicate that love to his listeners. The orchestra, amateur or not, respond with equal ardor. They may not produce the lush, rich tones of a bigger group, but they make up for it with their eager (and accurate) musicianship. And the third-movement Adagio is as lyrical and sensitive as you'll find.

Which brings us to the concluding choral movement (the familiar "Ode to Joy"), the moment everybody's been waiting for. Here, the orchestra takes a backseat to the various soloists and choruses participating. In fact, the orchestra practically gets overwhelmed. Moreover, Maestro Bernard lessens the speeds a tad, giving the music a little more chance to breathe, yet the overall impression remains one of intense drive. It's an exceptionally energetic and dramatic interpretation, with the soloists and choruses contributing to favorable effect.

Maybe not everyone will take a shine to Bernard's thrill-a-minute rendering of so well-loved and well-travelled a piece of music, but there's no doubt his is an entertaining ride. You may even find yourself coming back to it more often than you imagined.

Engineers Joseph Patrych and Antonio Oliart recorded the symphony at the DiMenna Center, New York City in November 2016. You'll find a fine sense of orchestral depth, a modest hall bloom, and a relatively wide dynamic range involved, which greatly enhance the realism of the production. Voices elicit a clear, vibrant response, if a bit close. Although stage width is somewhat limited, it has little impact on the recording's clarity. There is also some degree of upper midrange brightness and edge, particularly noticeable in the vocals, but it's not enough of a deal killer to be entirely distracting. While the sound may not be absolutely audiophile, it's quite good and complements the orchestra especially well.