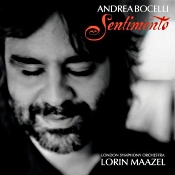 Esteemed conductor and violinist Lorin Maazel tells us in the booklet note that his father was an ardent admirer of the early twentieth-century violin-tenor duets of Fritz Kreisler and John McCormack and that he collected many of their popular recordings. So when the opportunity came for Maazel to record such material with Italian classical tenor Andrea Bocelli, he jumped at it. The result in this 2001 release is more than a series of popular Italian songs, however, as the compositions involved include not only familiar works by Tosti and Martini but pieces by Rodrigo, Leoncavallo, Offenbach, and Rossini as well. The result is an entirely satisfying collection of familiar, if still lightweight fare.

The listener may not mistake Mr. Bocelli's voice for the mellifluous timbres of Domingo nor the electrifying highs of Pavarotti, but it sounds surprisingly flexible and flowing, with a sturdy tone and a wide range. I confess my own previous acquaintance with the artist had been in bits and pieces of PBS specials on TV, hardly a fair way to judge the man's vocal qualities. I was delightfully surprised, therefore, when I heard him on disc, although I was not as overwhelmed by his talents as many people are.

The term "Sentimento" for the album derives from the fact that all of the chosen songs are connected to strong personal feelings and emotions, the selections largely ballads or romantic repertoire. In addition to the popular songs of Tosti, there is a vocal rendition of the second movement of Rodrigo's Concierto de Aranjuez, Offenbach's "Barcarolle" from Le Contes d'Hofmann, Liszt's Liebestraum No. 3, and others. It's incorrect to say these are purely duets, however, as the two men (Bocelli and Maazel) are discreetly accompanied by the London Symphony Orchestra.

The Philips recording of Bocelli's voice sounds superb, ringing loudly and clearly but not too forwardly, with the violin well balanced by his side. The orchestra, however, is another matter, which may please some listeners and bemuse others. At first one hardly notices the orchestra, probably a plus as the ensemble should not draw attention to itself. Later, one notices the instruments do not appear as well focused as they should, and they don't just spread out behind the soloists but practically envelop them. It's not an unpleasant sonic experience, but an oddly different one.