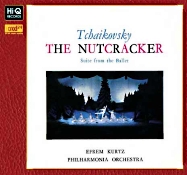 Conductor Efrem Kurtz (1900-1995) recorded the present suite from Tchaikovsky's Nutcracker in 1958, about the same time as he recorded highlights from Tchaikovsky's Swan Lake, which I reviewed a few weeks earlier. The performance under review is a typically good, lively account of the score from this conductor, although it doesn't quite have all the enthusiasm and ebullience I found in his interpretation of Swan Lake. Nevertheless, the biggest question is probably whether the audiophile remastering from Hi-Q Records is worth the extra money you'll pay for it in terms of performance and sound. There are, after, a huge number of recordings of the work already out there at a fraction of the cost. The answer to the question of worth is yes...and no. Let's consider it.

As I'm sure you know, the Russian composer Peter Tchaikovsky (1840-1893) adapted his two-act ballet The Nutcracker from E.T.A. Hoffman's story "The Nutcracker and the Mouse King," and he premiered it in 1892. However, he didn't like it. Indeed, friends said he hated it, especially compared to his previous ballet, The Sleeping Beauty. It's ironic, then, that in our own time The Nutcracker has become possibly Tchaikovsky's most-popular, nay most-beloved, work and maybe the most-popular ballet of any kind ever written. Certainly, it has a little something in it to make everybody happy, particularly at Christmas time.

The suite that Kurtz gives us offers most the ballet's most well-known music, and Kurtz does an admirable job making it all sound familiar and comfortable. That may be his downfall, too, in that the performance, as delightful as it is, doesn't really do much more than most other performances do. Everything sounds letter-perfect without being particularly distinguished.

What is distinguished, though, is the playing of the Philharmonia. The orchestra sounds as rich and elegant as any orchestra has ever sounded. The result is an orchestral presentation as naturally buoyant, articulate, and precise as any you'll find.

Anyway, it's hard to fault anything Kurtz does here. The music dances all bouncy and cheerfully throughout. When it needs a healthy dose of adrenaline, Kurtz provides it. In other words, everything is as you would want it, with a nice balletic lilt to the big tunes. But so it goes with a dozen other conductors in the piece. No, the joy of the Kurtz recording is its sound, which is quite good.

My only minor concerns are the same ones I had with Hi-Q's Swan Lake release: While there are track listings, they are rather ambiguous, and there are no timings for any of them. (To set matter straight, there are sixteen tracks, totaling about forty-two minutes). Furthermore, I had a really hard time getting the disc loose from its center spindle. As I say, minor issues, but slightly frustrating.

The Hi-Q packaging, as always, is immaculate: A glossy, hardcover Digipak-type design; liner notes bound to the inside; the disc fastened to the inside back.

The sound, as expected, is much like that of Hi-Q's Swan Lake, if anything a little warmer. The high mark is its midrange transparency. It is very clear, very detailed, and very clean. There is also a realistic stereo spread, a fine sense of orchestral depth, and a sparkling top end. The dynamic range, impact, and lowest bass impress one a little less. Not that there is anything seriously wrong with them, but they seem more ordinary than the rest of the sound. As I said about the previous Kurtz recording, too, the overall balance tends to favor the upper mids and lower treble a bit more than the bass end of the spectrum. So, if your system is at all bright, the recording might sound a tad forward. Still, that wonderful midrange clarity should more than compensate for any small shortcomings.

You can find Hi-Q products at any number of on-line marketplaces, but you'll find some of the best prices at Elusive Disc: http://www.elusivedisc.com/