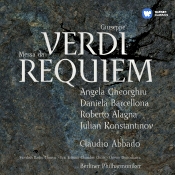 This recording, originally released by EMI and now available from Warner Classics, was, I believe, Abbado's third rendering of Verdi's Requiem Mass on disc, and I suppose the third time's the charm. His previous two efforts were on DG and with different orchestras, but as memory serves me they are very much of a kind.

Abbado appears to see the work as just what it is, a Celebration Mass for the dead, and as such he fills it not only with the powerful Wrath of God but with gentle and comforting words of mercy and forgiveness, too. It is in these quieter, calmer moments of repose that I found Abbado's vision especially moving, a sweeter, slower-paced, more contemplative reading than those of some of his rivals, yet just as gripping. You might say he follows the advice of many critics by not making the piece sound too much like a large-scale grand opera.

There is no questioning the glory and grandeur of the Berlin Philharmonic or the choirs involved, who do complete justice to the glory and grandeur of Verdi's score. Nor do Abbado's soloists let us down: Angela Gheorghiu, Daniela Barcellona, Roberto Alagna, and Julian Konstantinov sing well, although here the listener may have his or her own favorites and find this quartet a tad underpowered.

Of course, there are still a couple of good alternative accounts to contend with. One is Carlo Maria Giulini's classic version with the Philharmonia (EMI), imbued as it is with just the kind of operatic overtones that Verdi didn't particularly want conductors to impose on the work. Personally, I like Giulini's rendition for that very reason. Another is John Eliot Gardiner's more highly charged realization with his period-instrument band, the Orchestre Revolutionnaire et Romantique, on Philips. This latter interpretation may bring with it a tad too much dynamic power and intensity, but it also remains among my favorites.

Back to Abbado's account: the sonics, recorded live over two nights in January 2001, with the maestro's imposing Berlin forces, sound at once clean and clear, yet sometimes at the expense of being almost too fierce in the treble. The soloists also seem a bit too forward at times, and deepest bass can occasionally seem lacking. Nevertheless, as I've already said, the singers are splendid, the orchestra is as glorious as ever, and the lucidity of the sound is generally impressive, so no one should really fear buying the set on aural grounds just because it's live. What's more, the audience is relatively silent throughout the proceedings, so there is another worry assuaged

I quite enjoyed this release.

To listen to a couple of brief excerpts from this album, click on the forward arrow: