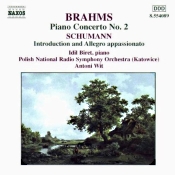 If at first you don't succeed.... After the initial failure of his First Piano Concerto, German composer Johannes Brahms (1833-1897) waited almost twenty years before attempting his second one. These days, most classical-music fans view both concertos as cornerstones of Romantic classical music, even if I find them sometimes a tad ponderous.

Whatever, the Second Piano Concerto begins in somewhat massive fashion, an echo of the First perhaps, with a long opening movement containing stretches of purely orchestral impressions. The second movement is lighter and zippier, although not by a lot. The leisurely third movement Andante arrives just in time to save the piece from collapsing under its own weight, and the frolicsome finale further saves the day by elevating the music to memorability. The Second is a touch more lyrical than the craggier First, and it has found much favor in the process.

Turkish concert pianist Idil Biret's playing seems a little perfunctory in the opening sections, but it becomes most able in the final movements. Compared to my two favored pianists in this work, Emil Gilels (DG) and Stephan Kovacevich (Philips), Ms. Biret appears slightly mechanical, never quite expressing either the grandness of the opening movement or the poetry of the slow movement. Nevertheless, she does play forcefully throughout the piece and especially charmingly in the closing part. Overall, her playing appears virtuosic, expansive, and outgoing, certainly well within keeping, given the Romantic tradition, and her straightforward style may appeal to many listeners.

The orchestral accompaniment of Maestro Antoni Wit and the Polish National Radio Symphony can range from burdensomely obscure to warmly, moodily transparent, depending, I suppose, on the mood of the engineers. Some of the sound Naxos provides is excellent, particularly the piano tone; at other times the sonics seem to lapse into something a bit more undefined.

I found the disc's coupling, Robert Schumann's Introduction and Allegro appasionato, more to my liking, being more concisely treated as well as striking a better balance between orchestra and soloist.

At a relatively low Naxos price, this Brahms issue may seem a bargain, but if one remembers that the Gilels and Kovacevich recordings cost really about the same as the Naxos, they can look like more and more like absolute treasures.