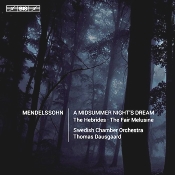 As you no doubt know, German composer Felix Mendelssohn (1809-1847) began work on his music for William Shakespeare's comedy A Midsummer Night's Dream as a teenager, composing the Overture in 1826 when he was only seventeen. Then he stopped, completing the work some sixteen years later in 1841 while employed by the Prussian court. It was here that King Frederick William IV suggested he compose some complete incidental music for a new production of the Shakespeare play, and Mendelssohn complied since he had already written the opening tune.

For me, any new recording of the music has the formidable job of living up to the airy, mercurial, and magical performances of Otto Klemperer and Andre Previn (both on EMI), the latter giving us pretty much all of the music Mendelssohn wrote for the play, including little interconnecting pieces. On the present disc, Maestro Thomas Dausgaard and the Swedish Chamber Orchestra give us most of the music, too, at least the parts most listeners probably want. The music itself, of course, is highly programmatic, representing Shakespeare's major plot ideas and characters, most notably Puck, Bottom, the Duke, and the fairies.

Having a smallish chamber orchestra helps Dausgaard, as the music can sound sweet and transparent performed on an intimate scale. Anyway, Dausgaard maintains some fairly quick tempos throughout the performance, starting right out with a fast-paced Overture. However, while it can appear to inject some new life into an old warhorse, it also tends to detract a bit from the music's lighthearted, fairy-tale charm. When the conductor does slow down within a movement, it can come more as a disconcerting contrast than an imaginative nuance.

I have to admit, though, that Dausgaard does project some lively and entertaining rhythms in the piece, and the Scherzo sounds especially buoyant and responsive. The chorus and soloist make a sweet contribution in "Ye Spotted Snakes"; yet the familiar Nocturne seems more perfunctory than it should be.

In the "Wedding March" Dausgaard's penchant for a swift gait works best, I think. This actually sounds like a fairy-tale wedding to me--enchanting and solemn at the same time.

In all, I can't see Maestro Dausgaard displacing Klemperer or Previn in my own pantheon of Mendelssohn performances. Nevertheless, there is a great deal of life in this performance, and the Swedish Chamber Orchestra play enthusiastically.

Now, in terms of the couplings, I liked what the conductor did with the two overtures, particularly The Hebrides, which closes the program. He strikes a fine, delicate balance between the fury of the coastal waters and the eternal beauty of the sea.

I can't say I'm too keen on the darkness of the album cover, by the way. When did record companies give up providing covers to match the tone of the music? I dunno.

BIS's sound from this smallish chamber orchestra is excellent: clear, clean, warm, smooth, dimensional, airy, you name it. There is a spacious feeling present without any undue highlighting of instruments. One will also find the dynamic range impressive and the transient quickness and overall impact quite natural. Voices, too, show up realistically, with no brightness or edge. It's among the better-sounding new recordings I've heard in a while.