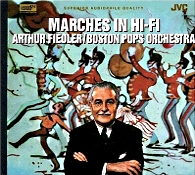 I read once that Arthur Fiedler had sold more classical albums than any conductor who ever lived. I can easily believe that, considering the man lead the Boston Pops Orchestra for something like a half a century. Nevertheless, music critics always seemed to consider Fiedler something of a lightweight when it came to classical conducting, despite his enormous experience and popularity. I suppose it was the nature of the repertoire he worked with, mostly well-loved light classics like this collection of marches for orchestra.

Fiedler recorded the present album in 1958, and it has remained a perennial favorite with music listeners ever since. In fact, among the drawbacks of the JVC audiophile remastering reviewed here is that it costs well over two or three times as much as RCA's regular "Living Stereo" issue, and it does not include an additional four marches that RCA added to their mid-price CD.

Another drawback is that not all of the performances on the disc seem very persuasive to me. Fiedler seems at times to be rushing through them at anything but a march tempo, as though he were in a hurry to get along with yet another project and be home in time for dinner. Among the interpretations that fared pretty well for me are those of Verdi's "Grand March" from Aida, Victor Herbert's "March of the Toys" from Babes in Toyland, Sousa's "Semper Fidelis," Robert Morse's "Up the Street," and Kenneth Alford's enduring "Colonel Bogey," featured in the movie The Bridge on the River Kwai.

The conductor's rather prosaic readings of a few other items, though, didn't charm me as much: "Yankee Doodle Dandy," Meredith Wilson's "76 Trombones" from The Music Man, Morton Gould's "American Salute," and George and Ira Gershwin's "Strike Up the Band," for instance.

The JVC engineers probably brought the sound up to its best possible specs through the meticulous care they lavished in their XRCD remastering process, and when it's at its best the sound is, indeed, pretty good. Bass appears solid, highs extended, and dynamics wide. But, oddly, there doesn't seem to be a lot of depth to the orchestral field, individual instruments sometimes get spotlighted and miked too close up, with a touch of congestion crowding some of the loudest passages.

In all, the whole package--the performances and the sound--comes up a somewhat mixed bag, maybe showing its weaknesses more so than some other recordings from the era.