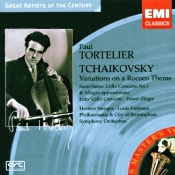 As you no doubt know, before Warner Classics acquired EMI's catalogue of music, EMI had repackaged a lot of their older material into mid-priced sets under the banners "Great Recordings of the Century" and "Great Artists of the Century." It's was as good a way as any of getting people's attention. In the case of this disc, the "Great Artist" is cellist Paul Tortelier (1914-1990), and he certainly seems worthy of the praise.

EMI made most of Tortelier's recordings from the 1950's onward, so the company had a good back catalogue of things to choose from. On this album, the cellist plays Tchaikovsky's Variations on a Rococo Theme; Faure's Elegie in C minor; Saint-Saens's Cello Concerto and Allegro appassionato; and Lalo's Cello Concerto. The performances are, as we would expect, uniformly excellent, displaying the musician's ability to produce strong, sleek, outgoing passages as well as quiet, introspective ones. Moreover, Maestros Herbert Menges and Louis Fremaux admirably accompany him with the Philharmonia and City of Birmingham Orchestras respectively.

The controversial part of the disc, however, may be its sound. Understandably, there are going to be some differences from track to track, given that the recordings range in date from 1955 to 1975. The earliest ones, with the Philharmonia, are in both in mono (the Saint-Saens Concerto and the Faure) and stereo (the Saint-Saens Allegro and the Tchaikovsky). The most-recent recording, with the City of Birmingham Symphony, naturally is in stereo (the Lalo).

Yet it appears that the EMI engineers made a conscious effort to ensure that they all sounded as much alike as possible. Namely, they all seem a touch bright and lean. Now, understand, this is how most of EMI's Fifties' stereo sounded, but it is not necessarily how the Birmingham Symphony recordings sounded. Here's the interesting part: I have the same Lalo Concerto as here on an early EMI Studio CD, and comparing the older mastering to this new remaster, the old disc sounds slightly warmer, richer, and less bright. Did EMI intentionally brighten up the Lalo to make it fit in with the sound of the rest of selections this time out? I don't know. The other minor problem is that the early stereo in the Tchaikovsky piece tends slightly to favor the left side of the sound stage.

In any case, the sonics are never a distraction, and with playing of such distinction, I doubt anyone will care if they are. Even the mono sounds pretty good, fuller and better tonally balanced than most of the stereo on the disc; so, as I say, I can't imagine too many listeners complaining, especially if said listeners are already Tortelier fans.