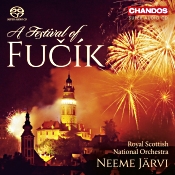 If you're not quite sure about the name Julius Ernst Wilhelm Fucik (1872-1916), it would probably take you no more than a couple of seconds into the "Entry of the Gladiators" to recognize the music. Oh, yes, Barnum & Bailey, to be sure.

Fucik was a Czech composer as well as conductor of military bands, with marches, polkas, and waltzes his specialties. Bands still play his music, although symphony orchestras seem to overlook him, probably because much of his work is, frankly, less than subtle and not particularly innovative. Maestro Neeme Jarvi and the Royal Scottish National Orchestra, however, attempt to rectify the situation somewhat with this collection of fourteen of Fucik's most-popular pieces, including the aforementioned "Gladiators" as well as the "Florentine" march and "The Old Grumbler."

The subject matter may be lightweight, but Jarvi and company embrace it with good-hearted enthusiasm and make the most of what they have. I must admit, though, that Jarvi's view of Fucik may be a tad too enthusiastic for some listeners. The Fucik disc of tunes I've had on the shelf for years is one by Vaclav Neumann and the Czech Philharmonic on Teldec, which sounds a fair bit more refined than Jarvi's, if not quite so exciting. They make a nice contrasting pair, the Neumann disc taming Fuck's typical bombast more than Jarvi's recording, while Jarvi goes more hell-bent-for-leather in sound as well as performance.

All of the selections are brief, three-to-five minutes apiece, with the exceptions of "Danube Legends" and "Little Ballerina," which have five sections each.

The Scottish orchestra plays them with finesse, despite the sometimes rowdy nature of the music, and the musicians are especially felicitous during the softer, gentler interludes (and almost every selection has such quieter moments, believe it or not).

My own favorites include the "Marinarella" overture that opens the program for the grace intermixed with its thrills; the march "Uncle Teddy" for its Sousa-like swagger; "Danube Legends" for its lilting (and for me familiar) waltz tunes; "The Old Grumbler" for its humorous bassoon solo; of course, "The Entry of the Gladiators," also known as "Thunder and Blazes," here given an invigorating workout; and the "Florentine March," also enthusiastically handled.

Although there is not a lot of substance to these pieces, Jarvi finds the sparkle and merriment in each selection and capitalizes on it. For march and waltz fans, it's not a bad collection, particularly when Chandos recorded it so well.

Producer Brian Pidgeon and sound engineer Ralph Couzens made the recording at the Royal Concert Hall, Glasgow, Scotland in February 2015. They made it for hybrid SACD and CD playback in multichannel and two-channel stereo. I listened to the SACD two-channel layer.

As we might expect from Chandos and Couzens, the sound is quite natural, quite robust, and quite dynamic. The lower midrange and bass have a real heft, the transient impact is palpable, and the ambient bloom of the hall is always in evidence. The engineers appear to have set up the microphones at a moderate distance, so we get a fairly lifelike response from a listening distance not too close up, with a good depth of field, as well. The engineers give up a little in the way of ultimate transparency for a feeling of being in the auditorium with the musicians.

Email ThisBlogThis!Share to TwitterShare to FacebookShare to Pinterest
Labels: Fucik