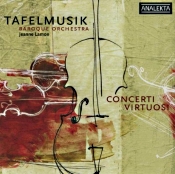 The Canadian period-instrument ensemble Tafelmusik is one of today's leading early music orchestras, the group as refined yet as exciting playing historical instruments as, say, the Academy of St. Martin in the Fields is playing modern instruments. The only trouble is finding enough good Baroque music to make the ensemble worth hearing, which is perhaps why they have reached out as far as the early Romantic period in their performances.

In any case, I know it sounds a bit harsh of me to criticize Baroque music, and it probably says more about me and my attitudes toward music than anything else. The fact is, I'm in a minority. The music of the Baroque and Classical periods make up the biggest part of the air time on most classical radio stations; it's that popular. Apparently, radio listeners love it as a sort of background music to whatever else they're doing during the day or night: driving or working or reading the newspaper. Perhaps I'm being unfair suggesting that Baroque music takes less concentration to enjoy than other types of music, but there is a fairly static quality about most of it that makes it akin to radio's "easy listening."

In any case, the Baroque music on this 2005 release from Tafelmusik comprises various concerti, a term that the booklet note explains got its meaning in part from the Latin word concertare, meaning "to contend, dispute, debate," and from the Italian, meaning "to agree, arrange, get together." The definitions would seem to be contradictory, and in a way so is the music, with the trio sections contending against yet blending with the rest of the orchestra.

All of the works on the disc come from the early seventeenth century, the composers being the ever-popular Antonio Vivaldi, Johann Sebastian Bach, and George Friedrich Handel, of course; the lesser-known Pietro Locatelli and Johann Friedrich Fasch; and the least-known Leonardo Leo. What they all have in common is that their concerti sound pretty much alike to the uninformed ear. Count me among those; I doubt that I could identify any single snippet of music from any of these works two minutes after listening to them. While I know that makes me sound like Barbarian, I nevertheless enjoyed every minute of every note.

Jeanne Lamon and her Tafelmusik ensemble make the music come alive, all the while sounding as graceful and elegant as any orchestra you'll find. It's no wonder Tafelmusik has become one of the leading period-instrument bands in the world. Along with the Philharmonia Baroque Orchestra, among others, they perform with a lively yet moderate style, never overemphasizing the period qualities of their playing and always allowing the tempos, phrasing, bowing, and various nuances to serve the music and not spotlight the players.

The sonics are typical of what the Tafelmusik players have been doing since switching to their own Analekta label some years ago. The recording sounds smooth, rich, wide ranging, vivid, and alive, without appearing in any way spectacular. The sonics are not bright, hard, or edgy as so many period-instrument recordings can sound; nor are the sonics as clear, open, and transparent as a few audiophile discs can be. The sound is simply natural and pleasant, never drawing attention to itself. The recording places the music above all else, which is as it should be.

With over seventy records to their credit, if any group can help a listener appreciate Baroque music, it's Tafelmusik.