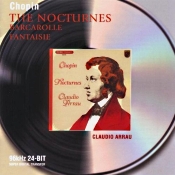 Chopin didn't invent the nocturne; Wikipedia defines it as "a musical composition that is inspired by, or evocative of, the night. Historically, 'nocturne' is a very old term applied to night Offices and, since the Middle Ages, to divisions in the canonical hour of Matins." Credit goes to Irish composer John Field for writing the first nocturnes under the specific title 'nocturne,' but Chopin did quite a lot to perfect and popularize the genre in the early decades of the nineteenth century. We think of nocturnes today as romantic mood pieces with expressive melodies and broad, buoyant, sustained accompaniment, and no one before or since has done them quite as eloquently as Chopin.

Frederic Chopin (1810-1849) must have loved the form because he continued writing nocturnes all his short life, the first ones penned in his teens and early twenties, the final ones written just a couple of years before his death. They're all here in the present collection, exquisitely beautiful, done up in raptly concentrated and deeply committed performances by Chilean pianist Claudio Arrau. In addition to the Nocturnes, including the posthumous C sharp minor, Arrau adds the Barcarolle in F sharp and the popular Fantaisie in F minor.

Arrau's way with these nocturnes is strong and emotional rather than purely poetic. Not that they aren't also warm and loving, especially as taken at the moderately slow speeds Arrau adopts, but they have a firm cohesiveness about them, along with some deliberate, solidly molded phrasing. Arrau's playing may not be as lyrical as Arthur Rubinstein's (RCA), who for me still holds pride of place, but Arrau's approach is still among the better, more-decisive interpretations of these works you'll find on disc.

Philips recorded the music in 1978 analogue and remastered them in 2001 using 96 kHz, 24-bit Super Digital technology for smooth all-around sound and reasonably low noise. The resultant sound isn't as quiet or as dynamic as some of today's all-digital recordings, to be sure, but after the first few seconds of listening you hardly notice the small amount of background noise present, and the dynamic range seems as wide as necessary. Otherwise, the sonics are rich and smooth.

This Chopin set was among the first of Philips's line of remastered classics, among which I can also recommend Bernard Haitink's Mahler Ninth Symphony (289 464 714-2), Stephen Kovacevich's Grieg Piano Concerto (289 464 702-2), Kiril Kondrashin's Rimsky-Korsakov Scheherazade (289 464 735-2), and John Eliot Gardiner's Handel Water Music (289 464 706-2). Philips used these and other recordings to celebrate their first fifty years of music making and, thus, they called the series "Philips 50: Great Recordings." Unfortunately, Philips went out of business shortly thereafter. Such is fate, I suppose. In any case, in my comparisons of a few of the remasters to their previous CD counterparts, the remasterings bring a touch more refinement and polish to the sound, without losing much vitality in the process. And the good thing is that you can still find most of these discs new or used.