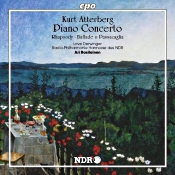 If the first few moments of Swedish composer Kurt Atterberg's Piano Concerto sound a lot like the Grieg Concerto, it probably isn't coincidence. Atterberg freely admitted an admiration for his fellow Scandinavian. Atterberg (1887-1974) is another of those artists whose works are important but seldom recorded. Perhaps they were only important in their time, and their time has come and gone. Nonetheless, it's lucky for us that companies like CPO (and Naxos and so many other labels) are keeping lesser-known composers in the public eye.

The Piano Concerto is the focus of this disc, although it's preceded by a delightful little Rhapsody for Piano and Orchestra that's full of exotic charm, and it's followed by the Ballad and Passacaglia, equally brief (about ten minutes) but equally fetching.

Then, in between, comes the Piano Concerto of 1936, which is foremost on the program, as well it should be. Besides beginning with a homage to Grieg, it settles into a series of powerful and rhapsodic statements of quite sophisticated, albeit slightly melancholy, orchestral proportions. After that is one of the loveliest (and again slightly melancholic) slow movements I've heard in some time. The finale, marked "Furioso," seems to me a little out of keeping with its somewhat subdued antecedents, but it does ease up at the end.

I admit that a previous disc of this composer's Third and Sixth Symphonies (CPO 999 640-2) did not impress as much as this one did, perhaps because of the Piano Concerto's further infusion of folk and blues elements. Whatever, I found it a minor treasure that I'm glad I got to hear. What's more, pianist Love Derwinger plays enchantingly, Maestro Ari Rasilainen keeps the pace moving sweetly, and the orchestra play it with a marked degree of enthusiasm.

As with CPO's earlier disc of Atterberg material, however, the sound is not overly impressive. There's nothing really wrong with it per se, mind you, but it doesn't impress one with any degree of transparency, impact, or stage depth. Rather, it just sort of hangs out there doing its own thing unobtrusively, if a bit softly and flatly.

Email ThisBlogThis!Share to TwitterShare to FacebookShare to Pinterest
Labels: Atterberg