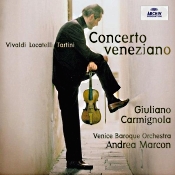 Absolutely splendid sound and performances drive this collection of Baroque works straight to the top not only of the recording pile, but to the top of the Baroque pile, the top of the classical-music pile, and the top of the music-in-general pile. Even though it's been around for a while, you may have missed it; thus, the reminder.

We've got a combination of assets working here. First, there is the selection of violin concertos from stalwart Baroque composers Antonio Vivaldi, Pietro Locatelli, and Giuseppi Tartini. The various works included (Vivaldi's RV 583 and RV 278; Locatelli's Concerto for Violin in G major; and Tartini's Concerto for Violin, Strings and Continuo in A major) are not as familiar as some others by these men and, therefore, come off sounding somewhat new.

Second, violinist Giuliano Carmignola and the Venice Baroque Orchestra play the pieces with a fresh vigor and spontaneity that communicate smoothly and easily to the senses. Their interpretations sound relaxed without being lax, vigorous without being overbearing. They simply appear graceful, spontaneous, well judged, and well executed, which is as much as I, at least, could reasonably expect from this music without the scores sounding distorted for the sake of eccentricity.

And, third, the sonics are about as good as it comes. DG released it on their Archiv label in April 2005, and it remains one of the best of its kind. There is a breadth and depth to the ensemble more than amply reproduced by Archiv's fully compatible (hybrid CD/SACD) SACD recording. Although the number of players is relatively small and, therefore, one would expect a good degree of transparency to the sound, we also get here a good deal of warmth, resonance, and natural hall ambiance. The result puts the listener closer to the actual orchestral experience than we would normally get in a period-instrument performance, where sometimes a hard, dry, brittle sound seems the norm.

It's hard to argue with the music, the performances, or the sound of this impressive entry from Carmignola, Marcon, and company.