From the Imperial Court (SACD review) 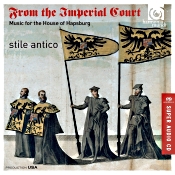 Stile Antico (ancient style) is a relatively small British choir of about a dozen singers who specialize in music of the sixteenth and seventeenth centuries. Founded in 2001, they have made all of their records so far for Harmonia Mundi, this latest called From the Imperial Court and featuring music written for the ruling Hapsburgs of the 1600's.

A booklet note explains that the Hapburgs were one of Europe's most extraordinary ruling dynasties, controlling "greater or lesser portions of Europe from the 11th century until 1918, their heyday coinciding with the supreme musical flourishing of the 16th century." They "essentially ruled Spain, Germany, Austria, Burgundy and the Low Countries" throughout the century. As "successive generations enlarged their power and territory, they gathered around themselves the leading composers of the day." Thus, Stile Antico have chosen what we must assume is some of the best of the music written for the House of Hapsburg in the sixteenth century: eleven selections from as many different composers, each item exquisitely handled.

I won't try to describe each piece; the booklet notes do a good job in that regard, providing a background on the composition of each work in addition to texts and translations. While most of the music is in the form of motets--polyphonic songs, usually on Biblical or similar prose texts and meant for use in church services--the various court composers involved in this recording wrote most of the music we hear for events of state, such as occasions celebrating newly acquired lands and power. Well, they were that kind of people: church and state entwined. At least one composer, de la Rue, hung around writing "soulful music" for a despondent and "increasingly insane" widow. Wonderful stuff. 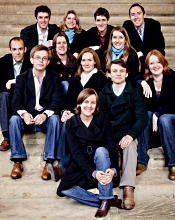 Favorites? Yes, I of course. I enjoyed Morales's opening "Jubilate Deo" for its spacious grandeur. Crecquillan's "Andreas Christi famulus" has a likable luxuriousness about it. Desprez's "Mille regretz" has a touching simplicity about it (and apparently King Charles liked it, too, as it was also one of his favorite songs). A few of the selections were a little too mournful for me, but the motet "Versa est in luctum," which Lobo wrote for his own funeral, is quite lovely. Then, too, the closing number--Isaac's "Virgo prudentissima"--sounds beautifully elaborated.

But picking favorites seems superfluous. It's really the splendid singing that counts here, and all of it is wonderful. Although there are only a dozen singers in Stile Antico, they sound almost like a full choir, their voices blending so well, the harmonies so exacting, the tone and timber so precise, so lilting, lyrical, and soaring. I think I could listen to them sing anything. For the record, they are Helen Ashby, Kate Ashby, Rebecca Hickey, and Alison Hill, sopranos; Emma Ashby, Eleanor Harries, Katie Schofield, and Cara Curran, altos; Jim Clements, Andrew Griffiths, Benedict Hymas, and Matthew Howard, tenors; and James Arthur, Will Dawes, Thomas Flint, and Matthew O'Donovan, basses.

Producer Robina G. Young and engineer and editor Brad Michel recorded the music in Direct Stream Digital at All Hallows' Church, Gospel Oak, London in October 2013. One can play the resultant Super Audio CD in two-channel stereo on a regular CD player or in two-channel or multichannel on an SACD player. I listened in the two-channel format and found the results more than satisfying.

Probably the most striking thing about the recording besides the fact that it's clear and detailed is how prominent the acoustic stands out. The ensemble members actually appear to be in a reverberant hall with a healthy decay time, the ambient bloom giving the voices both a richness and a sense of place. Yet, as I say, this setting never interferes with the clarity of the voices, which always project a healthy transparency. Perhaps the upper midrange is a mite forward, seeming a tad too bright on occasion, but otherwise there's a fine balance involved.