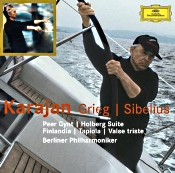 For a long while it seemed as though Herbert von Karajan would always be around. I mean, when I was a kid growing up in the Fifties, Karajan was already an established superstar. He was the leading conductor of the day when I began seriously collecting classical music in the Sixties; he was among the first to jump aboard when digital recording began in the Seventies; and he was there when Sony and Philips introduced CD's to the world in the Eighties. Now that he's gone, DG, for whom he made the bulk of his later recordings, have been reissuing everything he ever did, this collection of Grieg and Sibelius orchestral works just one in a series of two-disc compilations of his hits that DG began releasing in the early 2000's.

Listening to the first tracks on disc one, the Peer Gynt Suites Nos. 1 and 2, reminds one of his magic. The music is letter-perfect, luxurious, and alluring as only Karajan could make it. Every note is polished to a luster, the great Berlin orchestra sounding fabulously plush and precise. The orchestral sound alone would make Karajan the most famous conductor since Toscanini or Stokowski, but it would also create for him a few detractors as well, people who considered him a glamor boy over-embellishing the music he performed. Maybe, but it sure sounded nice. 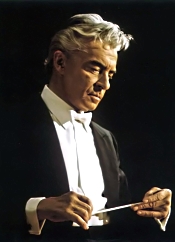 As I say, the two discs in this collection are each devoted to one of two famous Scandinavian composers, Grieg on disc one and Sibelius on disc two. Of the two discs, I preferred the Sibelius because Karajan's way of music making seems best suited to Sibelius's larger-scale works. Grieg, on the other hand, would seem to benefit from a little more intimacy, something Karajan had trouble producing, at least here. Sibelius's Finlandia, Valse triste, and Pelleas et Melisande come off best, with great crescendos and soft whispers of sound piling forth and fairly smothering the listener with riches.

The sonics, though, are typical of DG from the late Sixties to early Eighties. There is plenty of midrange presence, good detail, strong dynamics, and wide stereo imaging; but there is little top end, little bottom end, and little sparkle. It's perfect sound for mid-fi audio systems and car radios, where it was probably most-often heard when DG first produced it.

But even digitally remastered at 96 kHz/24 bits can't improve what may not have been there in the first place. Karajan's fans won't mind, nor did I mind until I compared it to similar material on other labels. Note, for instance, the enormous difference in frequency range between Karajan's 1972 recording of the Peer Gynt music and Beecham's much earlier recording on EMI's "Great Recording of the Century," the Beecham sounding better than a lot of stuff made today. Still, it's the music that counts, and Karajan's set contains some of the man's most likable and characteristic work.