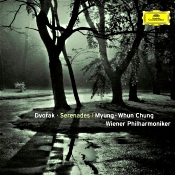 Dvorak wrote his Serenade for String Orchestra in 1875, for the composer a most productive year that also saw the completion of various chamber works, a grand opera, and his Fifth Symphony. It is the Serenade, however, that has proven of most lasting value, a particularly graceful piece that has come down to us as one of the nineteenth century's two most famous Serenades, the other being Tchaikovsky's.

Dvorak's Serenade most closely matches the Random House Dictionary's definition of serenade:  "...a complimentary performance of vocal or instrumental music in the open air at night, as by a lover under the window of his lady." The music has all the qualities of romance on a warm, still evening, and Maestro Myung-Whun Chung's rendition is warm and gracious to suit the mood. His manner with long, gentle, flowing lines is evident from the very beginning, and his lilting approach to the several waltz interludes in the second and fifth movements provides the work an uncommon elegance and tranquility. It is lovely music interpreted most felicitously by Chung and members of the Vienna Philharmonic's string section. 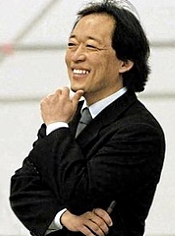 Most often, record companies couple Dvorak's String Serenade with Tchaikovsky's String Serenade, but this time it is alongside Dvorak's later Serenade for Wind Ensemble from 1878. This piece has a more sedate maturity about it, not quite so dreamily romantic, more blunt and to the point, but not without its touches of melodic fantasy. Perhaps it suffers by comparison to its earlier sibling because it has not the benefit of the more rapturous sound of massed strings going for it; one can only do so much with oboes, clarinets, and bassoons. But it makes a welcome and aurally contrasting companion to the String Serenade.

DG's sound is lush and mellow, smooth and effortless. There is no attempt here to capture any great transparency or crispness but to communicate both works' fluency through the most refined sonics possible. This is not to say the sound is soft or veiled in any way, however; it is not. Indeed, it is clean and clear but in a most comfortable and pleasing way. In fact, the only objection some buyers may have is that the two works on the album total a mere fifty minutes playing time together, which on the surface seems lean value for the disc. Still, with music making of such high order, perhaps it is not the price we should be looking at.