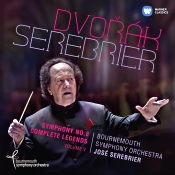 Uruguayan conductor and composer Jose Serebrier may have been in his late seventies when he recorded the present album, but clearly he has not slowed down since his debut with the American Symphony Orchestra in 1965. If anything, the autumn of his years has brought with it a mellowing yet still-vibrant maturity that seems perfectly suited to the material he conducts on the program, Dvorak's Legends and the appropriately autumnal Symphony No. 8.

First up on the program are the ten small-scale orchestral pieces, Legends, Op. 59, which Czech composer Antonin Dvorak (1841-1904) wrote in 1881 originally for piano four hands and arranged the same year in the orchestral versions we have here. There is a good deal of variety in the pieces because the composer arranged each of them with slightly different orchestrations. Serebrier demonstrates an appropriate feeling for the Slavic influences heard throughout the works, so under his direction we get a good deal of dramatic flair mixed in with the more-tender moments. Also, because there is nothing really to hold the ten little individual items together, the conductor has to create a kind of unison among them himself, which Serebrier does through his obvious love and attention to detail. This is strongly emotional and highly Romantic music, performed with passion, to be sure, yet not with undue melodrama. While I have to admit that listening to all ten of these Legends at the same time can be somewhat tiring toward the end, at least Serebrier is flexible enough to maintain one's attention, and you couldn't ask more from the Bournemouth orchestra.

Then, we get the primary work on the disc, Dvorak's Symphony No. 8 in G Major, Op. 88, written in 1889. The piece is among the most-cheerful and poetic of Dvorak's works, the style and structure very much in the Czech Romantic tradition and the inspiration coming largely from the Bohemian folk tunes of the composer's native country.

Dvorak marks the first movement Allegro con brio, with various themes calling upon the sounds of nature, like the birdsong of the flute, creating a sweet atmosphere. Things begin, though, on a somewhat sorrowful note, which quickly morphs into a pleasantly happy, dance-like melody. Serebrier takes the opening theme slowly and deliberately, so that when the change comes, it seems all the more radical and exciting. Under this conductor, it's a thrilling, uplifting change that nicely sets the tone for the rest of the work, without becoming bombastic or overwhelming. 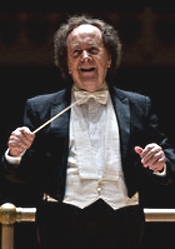 The second movement Adagio (slow, leisurely) starts out as the first movement did with a sort of dour quality of sadness and impeding gloom. Yet it, too, eventually gives way to an inevitably triumphant joy. Again, Serebrier handles it with supreme delicacy, creating transitions so smooth, you hardly know they're happening.

In the third-movement, marked Allegretto grazioso - Molto vivace, we find a sort of dumka (a Slavic folk ballad alternating between sadness and gaiety), generally accepted as a vaguely melancholic waltz, followed by a lively close. Serebrier manages the waltz elements gracefully, bringing out their lilting, lyrical rhythms most tenderly. It's one of Dvorak's loveliest moments, and we're lucky to have people like Serebrier who know how to conduct it with simple elegance, without getting all sentimental on us.

Dvorak fills the Allegro ma non troppo finale with Slavic dances and folk tunes, which the composer expected conductors to treat with energy but not too much so. Here, Serebrier ensures that we remember the symphony's smiling-bright disposition, infusing every note with good cheer. Even the middle section with its vaguely sinister overtones sounds ultimately optimistic under Serebrier. His is one of the more-inspired readings you'll hear of this work.

Producer Chris Hazell and engineer Mike Hatch made the recording at The Lighthouse, Poole, England in February 2014. The sound can be slightly aggressive at times, with a prominent but not objectionable upper midrange. Still, you can't say it doesn't add a fair amount of definition and clarity to the presentation, and the result is mostly pleasing. The stereo spread appears wide and deep, providing a realistic impression of the orchestra's dimensions. Frequency range and dynamics are also up to the occasion. Unless you're playing the music exceptionally loud, the sound remains quite comfortable.