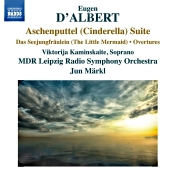 What would we do without Naxos? Certainly, we would not get to hear as many neglected eighteenth and nineteenth-century composers as the label affords us. In this case it's Eugen Francois Charles d'Albert (1864 - 1932), a Scottish-born German composer and pianist who got his early education in Scotland before moving to London in his later youth. Then, showing musical talent, d'Albert won a scholarship to study in Austria, where he stayed for a while before moving to Germany, there studying with Franz Liszt and starting a career as a concert pianist.

Apparently, he was all the rage as a virtuoso pianist, but he also produced a prodigious number of musical compositions including twenty-one operas and numerous orchestral and chamber works. On the present album, conductor Jun Markl and the MDR Leipzig Radio Symphony Orchestra provide a variety of the man's overtures, preludes, and suites. While I can't say I fell in love with any of them--and it's probably no accident that much of the fellow's music fell into neglect--I didn't dislike any of the material, either, most of it varied and tuneful enough to maintain my interest.

Maestro Markl begins the program with three brief overtures and two preludes. All of them appear to fall squarely in the Romantic idiom, and none of them seem to me particularly memorable. As this is only the second such d'Albert collection from Markl, one assumes the conductor chose some of the best of d'Albert's music to record. If that's the case, maybe the rest of it deserves neglect. Anyway, the first selections are the Overture to Grillparzer's Esther, the Prelude to Die toten Augen ("The Dead Eyes"), the Prelude to Act II of Gernot, the Overture to Der Rubin ("The Ruby"), and the Overture to Die Abreise ("The Departure").

The music of the opening pieces offers just about every turn of phrase you can think of, most of it loud and not a little bombastic. Well, that's the nature of most overtures, in any case; composers mean for them to get and hold our attention as the curtain rises on a production. It's just that here it's the "get" that works, not really the "hold." Despite Markl's best efforts and the splendid work of the MDR Leipzig RSO, the music doesn't really reveal anything new, innovative, special, or unusual I could latch onto. The best I can say for it is that it's totally innocuous, so you won't feel as though you wasted your time on it. And, to be fair, "The Dead Eyes" Prelude has an appealing air of quiet mystery about it. 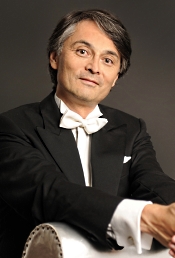 Then we come to the two centerpieces of the album: the Aschenputtel Suite ("Cinderella Suite") and Das Seejungfraulein ("The Little Mermaid") for soprano and orchestra. These were much more to my liking. Cinderella tells the familiar Brothers Grimm fairy tale, the suite having five movements that take us through the plot. Here, I enjoyed the storytelling aspect of each descriptive little tone poem, with Markl and his players well capturing the atmosphere, romance, and gentle adventure of the narrative. Well, OK, maybe Markl could have supplied a little more pomp and punch in the final wedding dance, but it's a minor issue.

D'Albert wrote "The Little Mermaid" (based on the story by Hans Christian Anderson) in 1897 for his wife at the time to sing (he married quite a few times). Here it's sung by Lithuanian soprano Viktorija Kaminskaite, whose voice justifies continued listening. It's quite lovely.

Although, as I say, I didn't find all the material on the album worth hearing more than once, there is no denying that you get enough of it. The disc contains over seventy-five minutes of music, close to the limit of a CD. For a relatively inexpensive product, you're at least getting your money's worth in playing time.

Tim Handley produced, engineered, and edited the music, which he recorded in 2011 at the MDR Studio Augustusplatz, Leipzig, Germany. The sound is fairly typical of Naxos's better work of late. It's big, bold, warm, and round, with a smooth, natural bloom from the hall. It's never forward, bright, hard, or edgy, nor is it especially transparent or ultra-clear. The sonics are rather modest, actually, providing a decent depth of field, with somewhat limited impact, dynamics, and frequency extremes. It's the kind of sound that will neither excite nor offend the audiophile but makes for easy, relaxed listening.

Email ThisBlogThis!Share to TwitterShare to FacebookShare to Pinterest
Labels: d'Albert