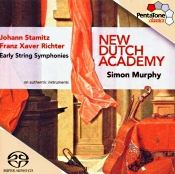 The PentaTone people were continuing their merry way releasing hybrid stereo/multichannel Super Audio CDs even in 2003 when they released this one. The disc is dual layered and runs on any standard CD player in two-channel stereo as well as on a SACD player in 2.0 and 5.1 surround. I can't be sure, but it seems that about half the stuff PentaTone have released so far they've made new, and most of the other material they've taken from Philips, who originally recorded it in multichannel during the Seventies but didn't release that way.

Anyway, the disc reviewed here features two and three works each from the eighteenth-century composers Franz Xaver Richter (1709-1789) and Johann Stamitz (1717-1757). The works on the program carry the title Sinfonia a Quattro (in A, D, B flat, and C minor, plus an excerpt, the Andante, from Stamitz's Symphony in D major). Not that any of this is likely to be familiar to very many people. Maybe that's the idea--to present material that conductors have not worn out through repetition. Unfortunately, despite the few innovative touches we hear throughout, the music on the disc begins to sound rather alike after the first few movements. Still, that's another story, and it may be due as much to the performers involved as to the music. Or it may just be my own limited musical scope. 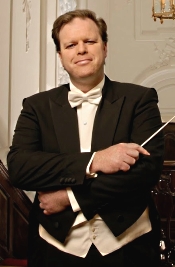 Whatever the case, the music is typically late Baroque, all deriving from around 1740-1750. Stamitz, a Czech composer, was one of those guys who wrote about seventy-five symphonies, most of them in the Mannheim style, where he served as concertmaster for a time. Richter, an Austro-Moravian, was a violinist, singer, composer, conductor, and music theoretician, and also at Mannheim at about the same Stamitz worked there, so you see the connection for this recording. The material will appeal to lovers of the Baroque who want and need everything they can lay ear to, as well as to listeners who want to hear the development of the early symphony as an art form.

The performances from the Dutch Academy players using period instruments under conductor Simon Murphy appear sturdy, certainly refined, technically accomplished, and fairly spirited, if not always as vigorous as say, the performances of the Philharmonia Baroque or Boston Baroque. The venue the engineers chose provides a lively acoustic, with plenty of hall reflection, a resonance that obscures some detail but tends to make the twenty-odd players of the Dutch Academy sound like a bigger ensemble than they are. More important, even in the ordinary stereo to which I listened, the sonics appear big and robust, with perhaps a touch less depth than I would have liked but otherwise flattering to the music.

Overall, though, this one is a dicey call. Neither the performances nor the sound seems like anything particularly special to me.