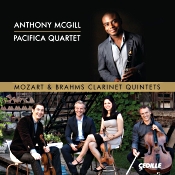 Austrian composer W.A. Mozart (1756-1791) wrote his Quintet in A major for Clarinet and Strings, K. 581, in 1789 for the clarinetist Anton Stadler; thus, sometimes people call the piece the Stadler Quintet (Mozart even called it that). It's one of the earliest and still among the most-popular such works for clarinet.

In four movements, the music is fluid and lyrical, especially in the capable hands of Anthony McGill (Principal Clarinetist for the Metropolitan Opera Orchestra) and the Pacifica Quartet (Simin Ganatra, violin; Sibbi Bernhardsson, violin; Masumi Per Rostad, viola; and Brandon Vamos, cello).

The quintet begins with an Allegro that sets the tone for the work. It's lovely and flowing, McGill proving a sensitive interpreter. But for that matter, all five performers play equally important roles, and their interplay is always delightful. They introduce a quiet yet smiling calm to the music from the outset, a tranquility they maintain for the duration of the work.

The second-movement Larghetto is probably the most-famous part of the piece, containing a beautiful melody that's hard to forget. McGill's clarinet sings a sweet, lyrical tune, again most sensitively and largely in dialogue with the first violin. The effect is heavenly, McGill's clarinet sounding rich, round, smooth, and mellifluous.

A Minuet forms the basis of the third movement, with two trios, one for strings and the second a sparkling clarinet solo over the strings. McGill's clarinet passages couldn't be more graceful or more charming, the music lightly, gently dancing along.

The final Allegretto con Variazione is obviously a moderately fast movement based on a series of five variations. It's filled with expressive cheerfulness, again with McGill's clarinet work leading the way; although for that matter the strings are really to the same extent responsible for the good spirits. You won't find a better treatment of Mozart's Quintet anywhere. 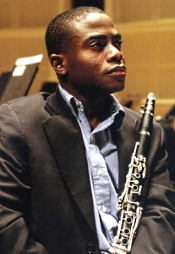 German composer Johannes Brahms (1833-1897) wrote his Quintet in B minor for Clarinet and Strings, Op. 115, in 1891 for the clarinetist Richard Mühlfeld. If Brahms's Clarinet Quintet is not quite as popular as Mozart's, it's at least close. There haven't been a whole lot of such compositions, period, so the works of Mozart and Brahms stand out.

Brahms's Quintet is in much the same mold as Mozart's, though a tad longer, darker, and heavier, emphasizing the somewhat brooding, melancholic moods of the clarinet. Here we find the same fine consistency among the players in a performance one could hardly find bettered.

Producer and engineer Judith Sherman and editor Bill Maylone recorded the Brahms in August 2013 at Auer Hall, Indiana University, and the Mozart in September 2013 at The Performing Arts Center, Purchase College, State University of New York. As we have come to expect from Cedille, the sound is excellent. The instruments appear well spread out across the speakers without being too close and without a trace of brightness or edge. The five instruments sound well integrated and well represented, the clarinet an integral part of the group, never dominating in terms of position. These works may highlight the clarinet, yet the instrument is also very much a part of the whole. And each instrument resonants clearly and articulately, with plenty of detail and definition. It's a pleasure listening to this ensemble.