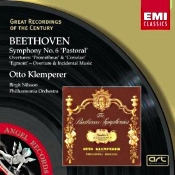 It's been over a decade now since EMI (now Warner Classics) last reissued Maestro Otto Klemperer's 1957 performance of Beethoven's Symphony No. 6 on CD, and it was appropriate that they released it in their "Great Recordings of the Century" line. Certainly, it's one of the great performances of the twentieth century.

I believe this was the recording's third, fourth, or fifth CD incarnation (depending on how you count the complete Beethoven sets), my reservations about its earlier CD rendering being in regard to its sound. It was somewhat thin, harsh, and noisy. By comparison, the 20-bit remastering released in 1998 as part of EMI's "Klemperer Legacy" series was smoother, fuller, and relatively quieter. Nonetheless, it retained a good deal of the original disc's clarity, sounding more transparent than most new releases. This 2003 remastering appears to me the same as the "Klemperer Legacy" one, so I can recommend it without hesitation.

The earlier disc's coupling, the conductor's reading of the Beethoven First Symphony, was not nearly so characterful as his Sixth, being a bit too massive for my taste to convey all of the work's good cheer, so it's good to see that EMI replaced it here with several overtures: The Creatures of Prometheus and the Coriolan, plus the overture and some incidental music to Egmont, all recorded the same year as the Sixth, 1957, a very good year, indeed.

But it's for the Sixth that people will probably want to buy this disc. I remember reading somewhere that when Klemperer's producer, Walter Legge, asked Klemperer if he didn't think he was taking the Scherzo a little too slowly, Klemperer replied, "Don't worry, Walter; you will get used to it." Well, we've had over fifty years to get used to it, and I suspect by now it has pretty much grown on us. Steady but firm is the key here.

Klemperer's performance continues to be one of the most relaxed, leisurely, bucolic, and wholly charming interpretations ever put to disc, which may seem a contradiction of everything we've come to think about the conductor, largely known for his monumental, granitelike readings. The performance of the Sixth has not and will doubtless never find favor among the Toscanini crowd, but it has delighted most everyone else since Klemperer recorded it. 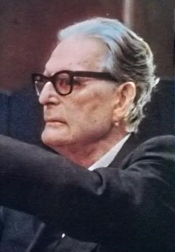 In the first movement, "The Arrival in the Country," Klemperer takes things very deliberately, very purposefully, its repetitions made more weighty through its unhurried pace, yet never dragging, never feeling lugubrious. The second movement, "The Scene at the Brook," flows naturally and smoothly, maintaining the easygoing nature of the setting. Then comes Klemperer's famous third movement, usually a quick and boisterous Allegro representing peasant merrymaking, but here taken as though the peasants were more than tipsy when the Scherzo starts, rather lumbering stably along. The storm that follows is weightily structured in big, bold outlines, flowing effortlessly into the highlight of the piece, one of the most joyous "Shepherd's Hymn" in any Sixth around.

This is no namby-pamby performance but one with a clear and assertive vision of pastoral life. Along with three or four other conductors, Klemperer leads the field in Beethoven Sixths. For the curious, the other recordings I would place on my list of outstanding Sixths are those of Karl Bohm (DG), Fritz Reiner (especially in its JVC and HDTT remasterings), Eugen Jochum (EMI), and, of course, Bruno Walter (Sony). This is an old, exclusive, and distinguished group of master musicians, among whom Klemperer still stands tall.