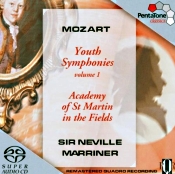 When director Milos Foreman and producer Saul Zantz asked Neville Marriner to conduct the music for Amadeus, their 1984 movie depiction of Mozart's life, there was good reason for the choice. These recordings are one of them.

In the early 1970's, Marriner was among the first conductors to record Mozart's early symphonies in stereo, a fairly startling and groundbreaking enterprise for the time. Back then, most people had pretty much disregarded most of the composer's youthful writing in favor of the big later pieces. Marriner showed the world the worth of some of the earlier works.

Then, in 2003 the folks at PentaTone Classics unearthed the original master tapes for a number of these Marriner recordings that Philips Records had originally done in the Quadraphonic format but never released that way. PentaTone remastered them in a series of four volumes in the two-layer, hybrid stereo/multichannel SACD format, this first volume of four containing the Symphony in G, and the Symphonies Nos. 7a, 12, and 18. Of the four symphonies, I must admit the two very earliest are charming but shallow; that is, they are tuneful, jaunty, and sweet, but they haven't a lot of substance one can remember. By contrast, Nos. 12 and, especially, 18 are more original, more complex, and more remarkable. Indeed, No. 18 is alone worth the SACD's asking price. That is, if you don't mind the somewhat hefty cost of these four-channel discs. 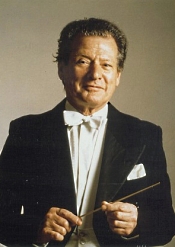 Needless to say, Marriner and the Academy of Saint Martin in the Fields perform the works with their customary sprightly vigor and refined taste, and the PentaTone engineers remastered the Philips recordings in audio highly reminiscent of how many of us recall Philips discs sounding in the early Seventies.

The sound, which Philips recorded at Brent Town Hall, Wembly, London in 1972 and 1973, is big and warm and a tad soft in the midrange, with traces of hardness at times in the treble, nevertheless providing the relatively small ensemble with a rather larger size than their numbers would admit; nonetheless, the audio seems entirely appropriate. This is not a period-instruments group, after all, and the sound seems properly traditional. Indeed, in the two-channel SACD mode to which I listened, I found the sound quite pleasing. It's maybe not entirely of audiophile quality, but it's reasonably natural and well defined.

Again, my only hesitation here is in recommending a person spend money on a hybrid SACD for two-channel stereo alone if a person hasn't got an SACD player to enjoy the full capabilities of the SACD or surround-sound layers. On the other hand, as far as I can determine at the moment of this writing, investing in this disc (or PentaTone's complete box set) may be the best way to obtain the Marriner performances since the original Philips discs in complete sets may cost even more, if you can even find them. And if you do have an SACD player, well, the disc seems self-recommending.