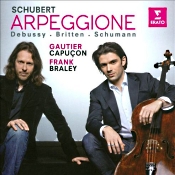 A booklet note tells us that “The arpeggione, a cross between the guitar, cello and bass viol, owes its moment of glory to Franz Schubert. Something of a hybrid, this fretted six-stringed instrument, devised by the Viennese instrument maker Johann Georg Stauffer in 1823, was held between the knees like the viola da gamba. It has sometimes been described as a ‘bowed guitar,’ ‘guitar d-amore’ or ‘guitar cello,’ but the name ‘arpeggione’ had its origins in the ease with which the instrument could be tuned (E, A, D, G, B, E, like the guitar), and played in arpeggios.”

Only, after all that, we don’t get the instrument on this disc. Gautier Capucon plays Schubert’s Sonata in A major for Arpeggione and piano, D.821 (the piece usually referred to simply as the Arpeggione, after the featured instrument) on the cello, since the original arpeggione had a heyday of only about ten years; with the exception of a very few recordings using reconstructed arpeggiones, musicians have performed the music on the cello since the mid nineteenth century. Pianist Frank Braley accompanies Capucon on a modern Steinway D-274 piano, and together the musicians make the piece come to life in innocent splendor, regardless of the instruments used.

The Arpeggione is basically a happy and optimistic occasion, typical of Schubert, meaning it's charming all the way, especially as Capucon and Braley do it up. After a brief slow introduction, the Allegro moderato quickens in pace considerably; however, because the tempos change from moment to moment, things never become either dull or hectic. Capucon has the lovely main theme to play with, weaving it comfortably in and around Braley's accompaniment.

The whole piece is wonderfully melodic, and the players insist upon the most lyrical interpretation, while still keeping the music lively and Romantic. By turns the opening movement can be poetic, energetic, introspective, wistful, sentimental, vigorous, and beautiful. Although Rostropovich long ago made one of the most-famous recordings of the work, I think I like this one just as well, particularly as it sounds even better recorded. 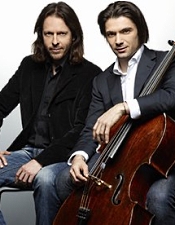 Anyway, after so favorable a start, the Arpeggione continues with a lovely if somewhat melancholic Adagio. This central movement does not last long, though, and before we know it we're into a hearty, good-natured final Allegretto, which Capucon and Braley move along briskly. There's a spirited freshness about their playing that makes the whole affair not only comfortable but downright intoxicating. It's a most-pleasant arrangement.

Coupled with the Schubert are short works for cello and piano by Robert Schumann: Five Pieces in Folk Style (varying from humorous, Gypsy-like tunes to innocent lullabies); Claude Debussy: Sonata for Cello and Piano (stormy, moody, and dreamlike); and Benjamin Britten: Sonata in C (expressive, anguished, and soulful). Here, Capucon and Braley maintain the same high level of artistry, virtuosity, and concentration they did before, even if I didn't think the music itself was as completely delightful as the Schubert.

Erato producer Michael Fine and engineers Jin Choi and Pierre-Antoine Signoret recorded the music at Markus-Sittikus-Saal, Hohenems, Austria, and Salle Colone, Paris (Schumann) in 2012 and 2013. Miked at a moderately close distance, the sound radiates a pleasingly natural ambient glow, both instruments clear and clean yet always with a warm resonance present. Neither instrument upstages the other, both sounding rich and sweet and dynamic in its own way.