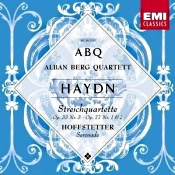 Chamber music is not as popular with the record-buying public as large orchestral pieces, so understandably music companies in the past used to record less of it. But, on the other hand, with the downturn the economy took some time ago, the record companies now produce more chamber and solo albums than ever. Lower costs involved, I guess. In any case, with music as felicitous as the quartets on this disc and with playing as refined as that from the Alban Berg Quartet, this album should please most everyone.

Most chamber-music fans know everything about the Alban Berg Quartet. Until their retirement in 2008, they were among the best-known, best-loved quartets in the world. Founded in Vienna in 1970, they took their name from the famous Austrian composer (at the suggestion of the composer’s widow). Their playing always exuded a radiant self-confidence, as well as consummate virtuosity, which they demonstrate here.

While Haydn’s output of chamber music was extensive, his String Quartet No. 3, Op. 33, nicknamed “The Bird,” has always stood out among the pack. Like most of the composer’s quartets, this one is really like a miniature symphony, a point the booklet note emphasizes, with the four musical instruments taking on the parts of a larger orchestra, and the four movements structured along symphonic lines. But it’s mainly the character of the music that entices one, the nickname clearly deriving from its birdlike chirping. Interestingly, the later quartets from Op. 77 are not quite as easygoing or beguiling as the one from Op. 33, the later ones seeming more severe, more strictly arranged, and nowhere near as bouncy or engaging. Still, it’s Haydn, meaning all of it is fascinating and fun. 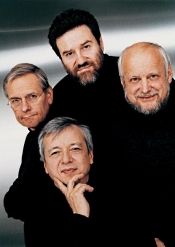 The collection concludes with the little “Hoffstetter” Serenade, Op. 3, that scholars long thought Haydn wrote (Haydn was himself unclear on whether he had written any of the works in Op. 3; when asked years later he said he thought he had), but musical researchers now definitely attribute the Serenade to Roman Hoffstetter. Who knows what will happen next week. In any case, you’ll recognize the piece the minute you hear it, and you won’t hear it any better than here.

While EMI’s sound doesn’t differ much throughout the four works, it is only No. 3 that the company recorded more recently (if you consider 1999 recent). They recorded the two Op. 77 quartets and the Serenade a half dozen years earlier in 1993-94, and only on this disc did they first see the light of day. In addition, EMI made the recordings live, although you’d only know it by the applause that suddenly erupts at the end of the first work. In any case, the sound is fine, wide and well balanced, a little soft perhaps, given the distance across the ensemble (seeming to indicate fairly close miking), but done up within a realistic acoustic. The sound and the performances make a most-pleasant offering.